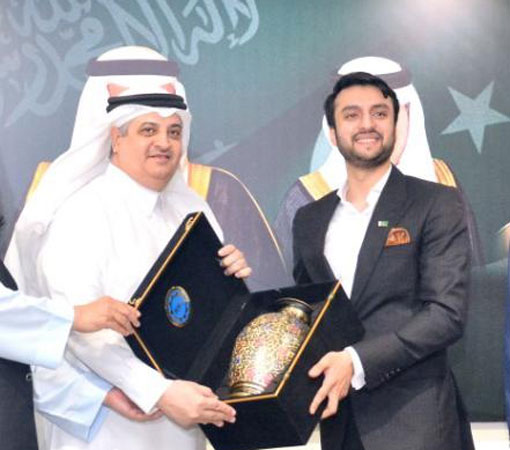 Addressing the gathering, President UMT Ibrahim Hasan Murad thanked the ambassador for visiting the unversity. He said that Pakistan and Saudi Arabia have brotherly ties based on mutual respect and due to the holiest mosques of Islam, friendship and unity. He also expressed that Saudi Arabia and Pakistan relationship is like two bodies and one soul which are getting stronger and stronger. It is the love between both brotherly countries that Admiral (retd) Nawaf Bin Said Al-Maliki calls Pakistan his second home.

Ibrahim Murad shared with the ambassador that there should be people to people exchanges between the countries. “As a matter of fact, we all Pakistani people love and welcome our Saudi brothers in Pakistan.”

Saudi Ambassador said that friendship of Saudi Arabia and Pakistan is in their blood that is why the Kingdom of Saudi Arabia will always love and support Pakistan. He said that “we teach our youth to give respect to Pakistani flag and people as well.”

Ambassador expressed that Pakistan is very important country in the region for the Mulism Ummah. “King Salman also felt at home in Pakistan on his visit to Pakistan,” he added. He said that UMT and Saudi Arabia would work together to foster relations between the two countries.