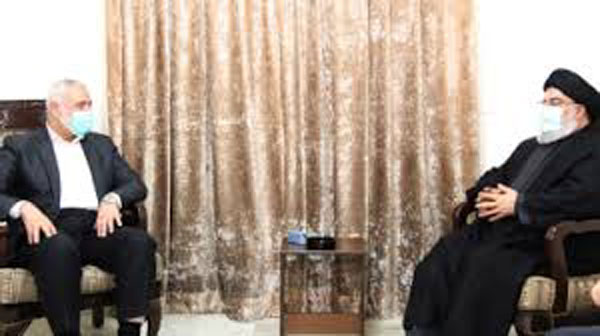 Leaders of Lebanon’s Hezbollah and the Palestinian Hamas movement have met to discuss diplomatic normalisation between the Jewish state and Arab countries, a report said Sunday.

They stressed the “stability” of the “axis of resistance” against Israel, the Hezbollah-run Al-Manar TV channel reported, without saying where or when the meeting took place.

Hassan Nasrallah, head of the Iran-backed Shiite Hezbollah movement, was pictured meeting Ismail Haniyeh, who heads the political bureau of Hamas, the Islamist movement that control the Gaza Strip.

They discussed “political and military developments in Palestine, Lebanon and the region” and “the dangers to the Palestinian cause” including “Arab plans for normalisation” with Israel, Al-Manar said.

The meeting comes after an August 13 announcement that the Jewish state and the United Arab Emirates have agreed to normalise ties.

While the US-backed diplomatic drive aims to boost a regional alliance against Iran, Palestinians have condemned it as a “stab in the back” as they remain under occupation and don’t have their own state.

Israeli Prime Minister Benjamin Netanyahu has said his country is in talks with other Arab and Muslim leaders now about normalising relations, following the deals with UAE and, decades ago, Egypt and Jordan.

Haniyeh has been in Lebanon since Wednesday, on his first visit to the country in nearly 30 years, for direct and video-conference talks with other Palestinian groups that oppose Israel’s diplomatic initiative.

Israel’s military has in recent weeks targeted Hamas in the Gaza Strip and what it says have been Hezbollah gunmen along its northern border with Lebanon.

It also regularly launches air strikes in war-torn Syria against what it says are Hezbollah and other pro-Iranian militants fighting on the side of President Bashar al-Assad’s regime.

Nasrallah has been living in a secret location for years and makes very few public appearances. He said in 2014 that he often changes his place of residence.