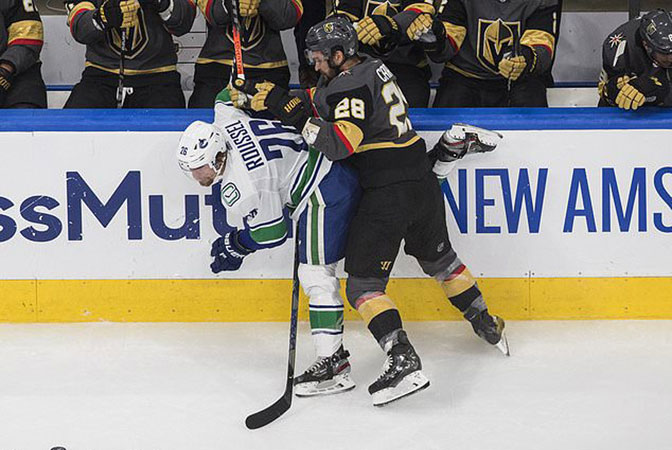 EDMONTON: Growing up in hockey, Zach Whitecloud learned an important lesson: Winning is hard, and it hurts to win.

“It still resonates ever day with me,” the rookie Vegas defenseman said. “Every single game´s going to hurt no matter what.”

Whitecloud and the Golden Knights epitomize that mentality, and it’s one reason they’re reached the part of the NHL playoffs that isn’t for shrinking violets. The Cinderellas have left the bubble and the teams left are built for the heavy, tough big boy games that will determine who lifts the Stanley Cup.

Vegas-Dallas Stars in the West and Tampa Bay Lightning-New York Islanders in the East will be rough and tumble series, as will the final between the winners that won’t get through the conference finals unscathed.

“You´ve got 10 gladiators in a small area flying around the ice and there´s a lot of contact and courage and heaviness are going to be a part of the game forever,” said Peter DeBoer, who’s trying to make Vegas the third team he has coached to the Cup Final. “That´s never going to change in hockey.”

Speed and skill are the trend in hockey, and there’s no shortage of offensive talent left in the postseason. Tampa Bay’s Brayden Point and Nikita Kucherov can light up opposing goaltenders, and each of the Western finalists is led in scoring by a young star defenseman: Dallas’ Miro Heiskanen and Vegas’ Shea Theodore.

But they wouldn’t be here without heaviness in their game. DeBoer points out that doesn’t mean being 6-foot-4 and 230 pounds but players being able to impose their will in puck battles and going to the “dirty areas” to score. The past two champions, the Washington Capitals in 2018 and St. Louis Blues in 2019, had plenty of that, and so will the team that wins this year.

Hockey’s best teams also excel at making their opponent uncomfortable. The Stars routinely did that to the Avalanche last round, and the smaller, faster Avalanche couldn’t match the physicality.

“We can never get away from our identity,” Dallas coach Rick Bowness said. “We want to be a hard, frustrating team: five guys working with your goaltenders. If you play good enough defense, you´ll create offense.”

No team created offense more in the regular season than Tampa Bay, which is in the East final for the second time in three years. But the Lightning also bulked up by trading for forwards Barclay Goodrow and Blake Coleman and signed defenseman Zach Bogosian, who coach Jon Cooper said have “seamlessly fit in, and we’re reaping a lot of the benefits of that.”

It hasn’t gone unnoticed a year after the Lightning won the Presidents’ Trophy as the best team in the league and got swept in the first round. Now they look like a real contender.

“What´s the difference between Tampa this year and last year? They added some of that heaviness to their lineup in that Goodrow line,” DeBoer said.