Division among US masses grows as armed groups clash in Louiseville 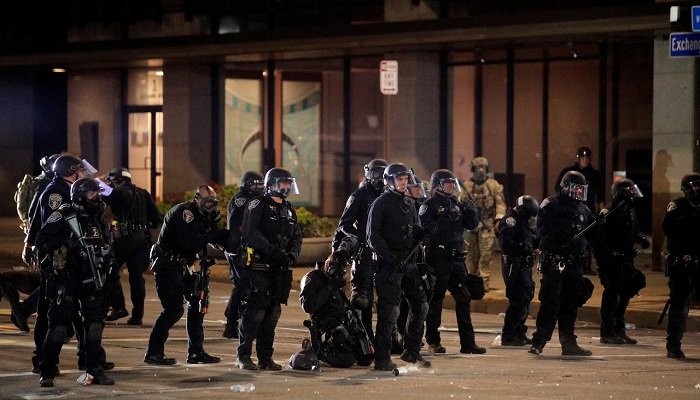 As disputes in cities across the United States continues to rage, armed police supporters and anti-racism demonstrators clashed in Louisville before the Kentucky Derby horse race, following which, Rochester police used tear gas to settle the situation.

In the afternoon, hundreds of protesters marched toward the Churchill Downs track in Lousiville chanting “No Justice, No Derby” — a nod to activists’ calls to cancel the annual race, which was being held without spectators because of the coronavirus.

Separately, roughly 250 members of a Black militia group named NFAC that has protested against the police killings of Black people assembled outside Churchill Downs, all armed with long guns.

NFAC leader John “Grandmaster Jay” Johnson taunted the officers standing guard in front of the track, but the group later retreated without incident.

Louisville has emerged as a key flashpoint in the summer of unrest because of outrage over the death of Breonna Taylor, a 26-year-old Black woman who was killed in March when the city’s police burst into her apartment using a so-called “no-knock” arrest warrant that did not require them to announce themselves.

Sadiqa Reynolds, president of the Louisville Urban League, said that while the race was not canceled as hoped she believes demands of protesters, which include holding officers involved in Taylor’s death accountable, were heard.

“Today was a show of force from the community of Lousiville to say that enough is enough,” she told Reuters. “We are tired of our lives not mattering.”

Earlier on Saturday, a group of counter-protesters, brandishing pistols and long guns, squared off with Black Lives Matter protesters and got into shoving matches in a park downtown. People on both sides screamed, faces inches apart. After about 45 minutes, police cleared the people from the park, but the protests outside Churchill Downs continued.

The counter-protesters included about 250 pro-police demonstrators, including Dylan Stevens, who goes by the nickname “The Angry Viking” and claims to lead a group of what he calls “Patriots.” According to his website, Stevens supports Republican President Donald Trump, the police, the military, and the right to bear arms.