Nawaz to return to Pakistan only when he is ‘declared fit’: PML-N 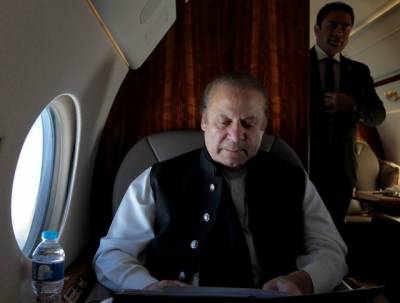 The Pakistan Muslim League-Nawaz (PML-N) on Saturday said that former prime minister Nawaz Sharif is in London for his treatment and that he will return to the country on the advice of his medical team.

Addressing a press conference along with senior party leaders, including Shahid Khaqan Abbasi, Khawaja Asif, Rana Tanvir and Rana Sanaullah, in Model Town, PML-N Secretary General Ahsan Iqbal said that Nawaz was allowed to travel abroad owing to his serious health condition, in the light of his medical reports. He expressed the hope that the judiciary will take into consideration that the outbreak of the Covid-19 pandemic had occurred soon after Nawaz left for the United Kingdom and health services and treatments worldwide had been disrupted as a result. “The delay in health services and treatment affected not only Nawaz Sharif but all other patients [as well]. We hope the judiciary will take this into consideration,” he said.

Iqbal said Nawaz had set an example not seen previously in Pakistan’s history by leaving his ailing wife Kulsoom Nawaz and returning to Pakistan in 2018 to ‘follow the law’. “This is why any discussion on [Nawaz’s health] is dismissive of his example and an insult to humanity,” he said.

Criticising the Pakistan Tehreek-e-Insaf (PTI) government members for ‘conjecturing’ about Nawaz’s health, he said they had done the same when Kulsoom was ill. “They used to make irresponsible statements regarding Kulsoom Nawaz’s health and were not even ashamed later,” he said. “This is a very serious matter and cannot be decided on talk shows. Nawaz Sharif is our asset and the nation’s asset and no compromise on his health and life can be made,” he further said. “He was granted permission to leave for treatment. He did not go for an excursion which is why he will return when his doctors decide he is healthy and fit to return. Our legal team will proceed according to the law,” he went on to say. “[PML-N workers] request him to complete his treatment […] When his doctors tell him he is fit to go, he will come back without any delay,” he added.

Responding to a question about the all-parties conference (APC) due to be held by the opposition, Iqbal said that the meeting of the Rehbar Committee has decided that it will be held on September 20. “The APC session will be called during a session of the National Assembly and further discussion [on all parties’ agenda] will be held then,” he added.

On Tuesday, the Islamabad High Court (IHC), while directing the former prime minister to ‘surrender’ before the court, had ordered him to appear in person in the next hearing in the Avenfield House reference on September 5. “The court is not declaring him [Sharif] an absconder. We are instead providing him an opportunity to surrender before the court,” Justice Aamer Farooq had remarked. A two-member bench of the high court, comprising Justice Mohsin Akhtar Kayani and Justice Farooq, had taken up appeals of PML-N supreme leader, party’s Vice President Maryam Nawaz and her husband, Mohammad Safdar, against their respective sentences in the aforesaid reference.