* PPP chief says if Centre matches Rs 800 billion package for Karachi, problems of the metropolis will be resolved 'to a great extent' 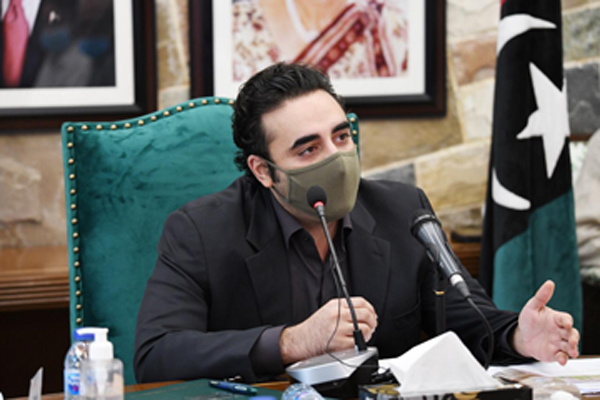 Pakistan People’s Party (PPP) Chairman Bilawal Bhutto Zardari Friday hoped that Prime Minister Imran Khan will announce a comprehensive reconstruction and rehabilitation package for Karachi and Sindh when he arrives in the city on Saturday (today).

Addressing a press conference at CM House along with Chief Minister Murad Ali Shah, provisional ministers Saeed Ghani, Nasir Hussain Shah and Nisar Khurro, Bilawal believed that the federal government will join hands with the Sindh government to help out people who had suffered from the recent spell of torrential rains in Sindh. “I hope Prime Minister Imran Khan will also take back his statement that the Sindh government is responsible for the destruction caused by monsoon rains,” he went on to say. “Even the army chief has acknowledged that no city in Pakistan can cope with a natural calamity of this scale,” he maintained.

Bilawal said if the federal government matches the Rs 800 billion package for Karachi, it would solve the problems of the metropolis ‘to a great extent’. While he appreciated the federal government for showing seriousness as regards to investing in Karachi for its infrastructure and development, the PPP chief maintained that it was the right of Sindh to get its share of funds from the Centre. “Those who taunt us by saying that we will not give Sindh its due share of funds, they should understand that this is not their father’s money,” he said. “These are funds that belong to the people of Sindh. They use money from the people of Sindh to run their government and the Centre,” he added.

To a question about Lt Gen (r) Asim Bajwa’s announcement of resignation, Bilawal said it was unfortunate that a precedent had been set by Imran Khan for PPP and PML-N MNAs, MPAs, ministers and special assistants that a person becomes guilty even before being proven so. “Allegations are hurled, then the trial begins, then JITs are formed and investigations are initiated along with a media trial that also takes place,” he said. “The problem is, when you do it for Nawaz Sharif, then you set a precedent in law and for the judiciary [for yourself] as well,” he added.

Referring to the prime minister’s aide on accountability, he wondered how a man who was a government official can buy properties in Spain. “If this accountability advisor or special assistant has properties in Spain and is using [derogatory] language for Justice Qazi Faez Isa, then he will have to come up to the same expectations himself,” he said. “If a JIT is formed over Panama Leaks, then the people of Pakistan will ask about Zulfi Bokhari’s [Panama Papers] case,” he said, adding that if his father and former president Asif Ali Zardari can appear before the court on September 9 for the Toshakhana case, then it is time for Akbar and any other special assistant to be held accountable as well.

Answering a question about who will be the new Karachi administrator, Bilawal said that it was up to Chief Minister Murad Ali Shah to pick whomever he wishes.

Bilawal also expressed happiness at the Rahbar Committee’s decision to allow the PPP to host the all-parties conference (APC), adding that the platform will be a good one to discuss all issues of the country.