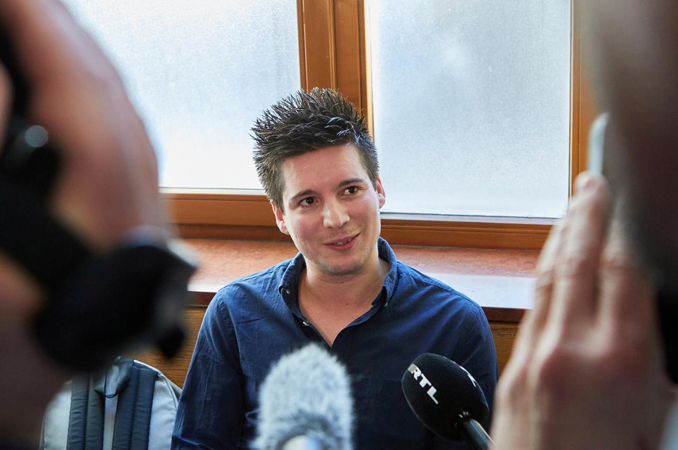 LISBON: The Portuguese man behind the Football Leaks website said at the start of his trial on Friday that he was proud to be a whistleblower on European soccer clubs’ big-money dealings. Rui Pinto, a 31-year-old former history student, faces 90 charges ––- ranging from unauthorised access to data and violation of correspondence to attempted extortion ––- in the case being heard at Lisbon’s Central Criminal Court. “I don’t consider myself a hacker. I am a whistleblower… My work contributed to freedom of expression,” he said, wearing an anti-coronavirus mask, dressed in jeans and sneakers, and looking composed during his opening statement. The revelations are serious and I’m proud, there’s no shame. I haven’t done anything for money,” added Pinto, who has previously cast himself as an anti-corruption campaigner.

Football Leaks’ data showed how some of the richest and most prominent figures in football avoided tax by channelling earnings offshore, and provided insight into wealthy Gulf individuals and organisations who became influential in the sport. It also examined the huge sums flowing through leading clubs and the uneven way authorities have applied rules. The documents provided some of the evidence that led to a ban ––- since overturned –– on English Premier League club Manchester City from competing in the European Champions League for alleged breaches of Financial Fair Play rules.

Detained in Hungary: Pinto was arrested in Hungary in January 2019, though he was later freed from house arrest and is now in witness protection. He faces a maximum 25 years in jail for the charges against him. Plaintiffs for football club Sporting, the Portuguese Football Federation, investment fund Doyen Sports and law firm PLMJ were present for Monday’s trial opening. Doyen lawyer Sofia Branco Ribeiro accused Pinto of illegally accessing their data and attempting to extort 1 million euros (£893m) from the company. Pinto’s lawyer Francisco Teixeira da Moto called those allegations “lamentable”. Police guarded the court from behind barriers, while two supporters held a photo of Pinto in solidarity.

The trial is expected to last until December and include testimony from 45 witnesses, including fugitive U.S. intelligence leaker Edward Snowden for the defence. In January, Pinto said he was also responsible for disclosing hundreds of thousands of files about alleged financial schemes used by Angolan billionaire and former first daughter Isabel dos Santos to build a business empire. Angola has begun criminal investigations but dos Santos has repeatedly denied wrongdoing.