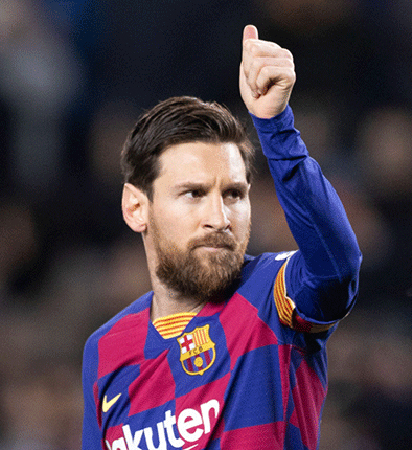 BARCELONA: Barcelona would be shattered if Lionel Messi left the club he has graced since he was a boy, but could the departure of arguably the world’s top player create the financial conditions to rebuild? The Argentinian maestro, who has been with the club since he was 13, handed in a transfer request after Barca’s humiliating 8-2 thrashing by Bayern Munich in the quarter-finals of the Champions League. After all the highs of his 21 years with the club, this was one step too far for Messi. The focus, naturally enough, has been on the football ramifications for Barcelona: how would a Messi exit affect them on the pitch as they try to rebuild under new coach Ronald Koeman?

But equally important for the Barca board is the financial implication of allowing the 33-year-old, who earns over 100 million euros ($118 million) in salary and bonuses per year, to take his brand to another club. The Catalans, however, are in deep financial difficulty. Quite apart from the 200 million euros it claims to have “lost” since the start of the coronavirus pandemic, Barca have been carrying a net debt of nearly 200 million euros since 2019. The club has taken out a loan of 140 million over five years with an American investment fund to help pay off the debt. And it has a massive player payroll, reported to be 542 million euros in the 2018-2019 season. So, in simple commercial terms a transfer fee, even if well below the 700 million euros quoted in his disputed release clause, would be a welcome windfall.

Bottom line: “Negotiate, agree, and smile,” wrote FC Barcelona journalist Xavier Bosch in a column in Mundo Deportivo on Tuesday, asking everyone to “act intelligently”. That may be harder done than said in the world of football, where passion often overrules economic pragmatism. Not surprisingly the supporters do not want to see the player nicknamed La Pulga (The Flea) leave, even though his performances in the last year suggest a slight waning of his considerable powers. But his transfer could be the real starting point on and off the field for the reconstruction of a club that not so long ago was the yardstick and envy of the world.

“I like Messi a lot, but I like Barca even more,” former club president Joan Gaspart told the Marca sports daily last week. “It is the club that is in control, not the player. If Messi leaves for an amount lower than that of his clause, it will be more humiliating than the 8-2” against Bayern, he said. According to Football Leaks, Messi’s annual gross salary in 2018, including bonuses, was more than 100 million euros, almost double that of his former teammate Neymar. The Brazilian, who left Barcelona for Qatari-owned Paris Saint-Germain in 2017 for a world record fee of 222 million euros, is paid around 52 million euros in salary per year.

“There has been a lot of talk about the fact that Barca have a very high payroll but a large part of that sum was intended for Leo and Luis Suarez,” economist and FC Barcelona specialist Juan Maria Gay de Liebana said. So in simple terms, even if they recruit another high-profile replacement, Barcelona could slash a chunk of cash from the payroll. And that might give Koeman, who arrived in August to replace Quique Setien, some wiggle room in recruiting new players to fulfil his vision for the team.

Marketing losses: But the business of football is never as straightforward as that. “At 854 million euros, Barca have the highest turnover among the biggest European clubs,” said Gay de Liebana. “The main core of their income comes from marketing (381 million euros) and TV rights (298 million euros) so it’s clear that the departure of Leo Messi will negatively affect Barca’s figures.”