* APC to decide whether there will be a new election or an in-house change
* Zardari, Nawaz discuss political matters via telephonic call 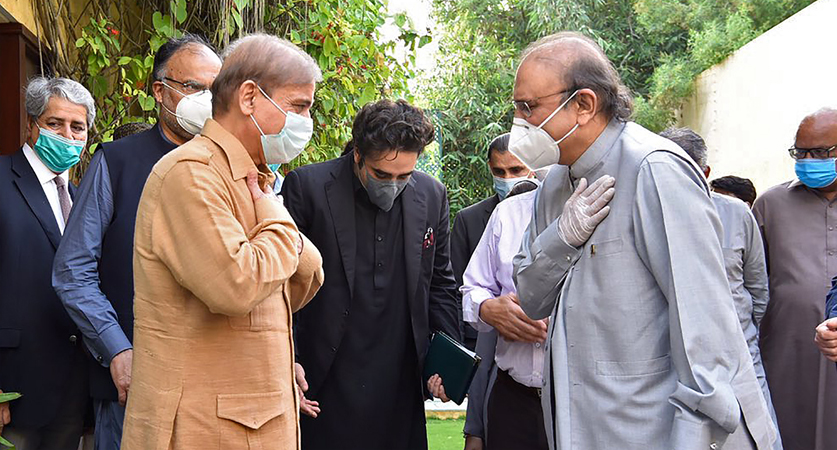 An all-parties conference (APC) has been scheduled for September 20 at the Zardari House in the federal capital, leaders of the Opposition parties announced on Thursday following a Rahbar Committee meeting.

“The situation in the country has reached a stage where we cannot afford even a moment’s delay,” JUI’s Durrani said, announcing that the APC would be held on September 20 at the Zardari House in Islamabad.

“We want free and fair elections in the country, with no interference whatsoever,” he added, terming the 2018 general elections “a disgrace to the whole country”.

Durrani said the opposition parties had had a consultation, wherein they decided that giving the PTI-led regime another day would be an injustice to Pakistan. “This government has destroyed the country in its two years” of rule, he added.

The upcoming APC, he added, would decide on the future plan of action as the opposition leaders had already made up their minds on numerous issues the country facing currently. However, the Rahbar Committee meeting was focused on one point, on which all participants were “on the same page”. “The APC will decide whether there will be a new election or an in-house change.”

PPP’s Ashraf said the opposition parties have been clear that “we will not back down on any legislation in the country’s interest and present our amendments to laws in the proposed legislation that are in conflict with human rights”.

He said the opposition parties realised the importance of the legislation pertaining to the Financial Action Task Force (FATF), which was why “we played our responsible role”.

“Our members worked day and night for the FATF-related legislation. We are ready to fulfil the related demands,” he added, noting that it was absolutely “wrong and absurd” to claim that the opposition parties were opposing the FATF-related laws in exchange of NRO.

“We were and are ready to do as much as the FATF wants.” he said, adding the government bulldozed the matter just because of the FATF issue.

“The opposition [parties] are a representative of the people of Pakistan and, therefore, propaganda must now end” against them, the PPP leader said, claiming that more than half of Pakistan formed the opposition.

“We do not want legislation that the government can use against the opposition. Pakistan belongs to all of us, no one can bear seeing Pakistan in trouble.

It emerged that PPP chairman and co-chairman, Bilawal Bhutto-Zardari and Asif Ali Zardari, had discussed political developments in Pakistan with Nawaz Sharif via conference call from Shehbaz Sharif’s telephone during the meeting held in Karachi.

Sources added that the top leaders of the two major opposition parties had agreed on making joint political efforts against the present government.