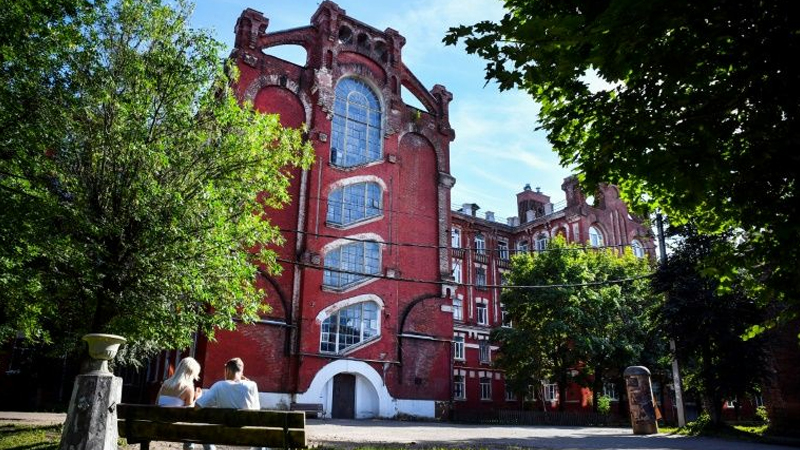 An elegant complex of red-brick buildings, the “Proletarka” in the Russian city of Tver was designed as model housing for workers. But a century later, its impoverished residents are living in squalor.

At the time, Russia had a thriving cotton industry, run by wealthy entrepreneurs, making colourful printed fabrics with a newly urbanised workforce.

After the Soviets seized power in 1917, the factory was renamed Tver Big Proletarian Manufactory, shortened in Russian to Proletarka, and the complex enjoyed its heyday as a self-contained community with shops, a library, hospital, two swimming pools, a theatre and even an observatory.

But, like with much of the communal housing that the Soviets set up across Russia, the Proletarka has become much less of a workers’ paradise since the 1991 collapse of the USSR.

“Hundreds of people live here, often five to a room, with mouldy walls and rusty, leaking pipes,” says Vladimir Mogilnikov, a 62-year-old pensioner, who has lived for four decades in the complex.

Residents share communal toilets, separated by flimsy shower curtains, and the ceilings are black with mould.

Children play together in the long corridors, escaping the cramped bedsits where their families live.

While the Proletarka stands out for its crumbling grandeur, the living conditions are nothing unusual in Russia, where many still live in communal flats, tumbledown wooden houses and long-unrenovated buildings due for demolition.

Official statistics are patchy, but according to housing ministry figures reported by newspaper Vedomosti, a third of Russia’s housing will need major repairs by 2045.

President Vladimir Putin has made the housing crisis one of the focuses of his much-trumpeted “national projects”, with state financing helping to boost new housing construction to 120 million square metres by 2024, up from 86 million in 2018.

Those living in Proletarka say none of this money has so far made its way to their home.

“It’s in a scary state,” says Dmitry Gruzdkov, who gives tours of the district, pointing out local history and heritage — the complex is listed as a site of cultural significance in Russia.

An ambitious plan to regenerate the area over 10 years was put forward, he says, but never implemented because it would have cost twice as much as Tver’s entire annual budget.

There have been some private renovations, including the conversion of 200 flats and the former fire station into offices in 2016.

But this is a drop in the ocean for the vast estate. The unrenovated parts of the complex are state-owned, meaning residents — who include many migrants from ex-Soviet states and people in insecure jobs — just have their bills to pay.

In the Soviet era, the Proletarka’s residential blocks were in high demand, as chronic housing shortages saw many living in communal accommodation.

Zinaida Ibragimova, a 69-year-old resident, remembers arriving at the complex 50 years ago as a collective farm worker from the Urals region.

Getting off the bus, she was amazed by the splendour of its red-brick facades.

Sitting on a sofa in the cramped cubicle that is her home, Ibragimova says she was happy, even sharing a 12-square-metre (129-square-foot) room with three other factory workers and waiting her turn to use the toilet or cook in the kitchen. “On holidays, we would set up a long table down the corridor. Back then, there were carpets and mirrors on the wall,” she says, smiling.

In the evening, the young women would go to the two swimming pools, the theatre or the library.

After the fall of the USSR, working conditions worsened and Ibragimova had her wages paid in rolls of cloth, which she sold to a neighbouring shop.

By the end of the 1990s, the factory had closed down — unable to compete against Chinese imports — and the Proletarka fell into disrepair.

Now its picturesque, unmodernised facades have become a draw for architecture enthusiasts and filmmakers.

“It’s become a ready-made location for filming,” says Mogilnikov, who is battling with local authorities to get the “forgotten people of Proletarka” rehoused. Television director Igor Zaitsev used the buildings to film a series on Soviet gangsters, set in the late 1940s.

He even recruited some of the residents as extras, including Ibragimova.