Dozens of protesters from the Defense Housing Authority and Clifton in Pakistan’s largest city, Karachi, have been charged with ‘terrorism’ for protesting. 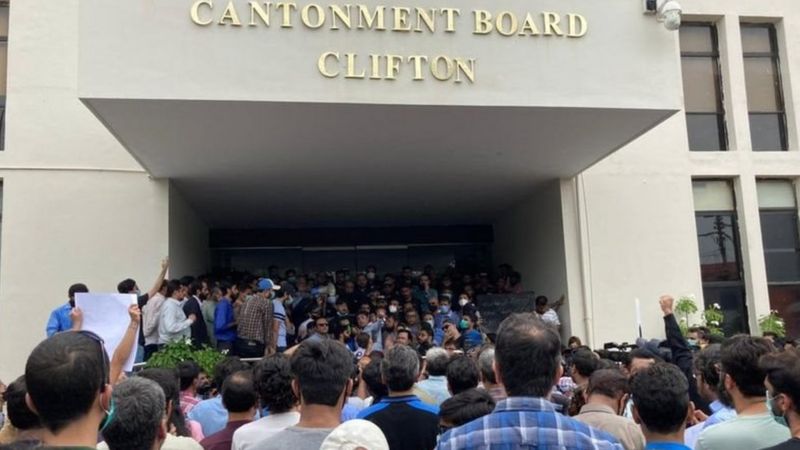 The Clifton Cantonment Board (CBC) oversees the administration of the Defense Housing Authority (DHA).

On Monday afternoon, August 31, residents gathered outside the office to protest and demand that the chief executive officer negotiates with them, but their demand was not met.

The FIR has been lodged under Sections 353 (assault or criminal force to deter public servant from discharge of his duty), 148 (rioting), 147 (punishment for rioting), 506 (criminal intimidation) and 34 (common intention) of the Pakistan Penal Code on the complaint of Munawar Hasan, building and security supervisor of the CBC.

The complainant stated that he was present at the CBC office located on Khayaban-i-Rahat, DHA Phase VI on Aug 31 while other staff were “in the field busy in dewatering efforts” when around noon, 40-50 “peaceful residents” gathered to lodge their complaints.

Frustrated by the lack of action by departments concerned, residents of DHA and Clifton had on Monday gathered outside the CBC office to protest against the post-rain situation in the two localities.

Some of the protesters lost their cool as they scaled the CBC office gate to force it open and stage a sit-in to demand removal of top CBC and DHA officials.

The post-rain situation in Karachi is currently the focus of political and military leadership. Pakistan Army Chief General Qamar Javed Bajwa also made an aerial tour of the rain-affected areas in Karachi and met the Karachi business community.