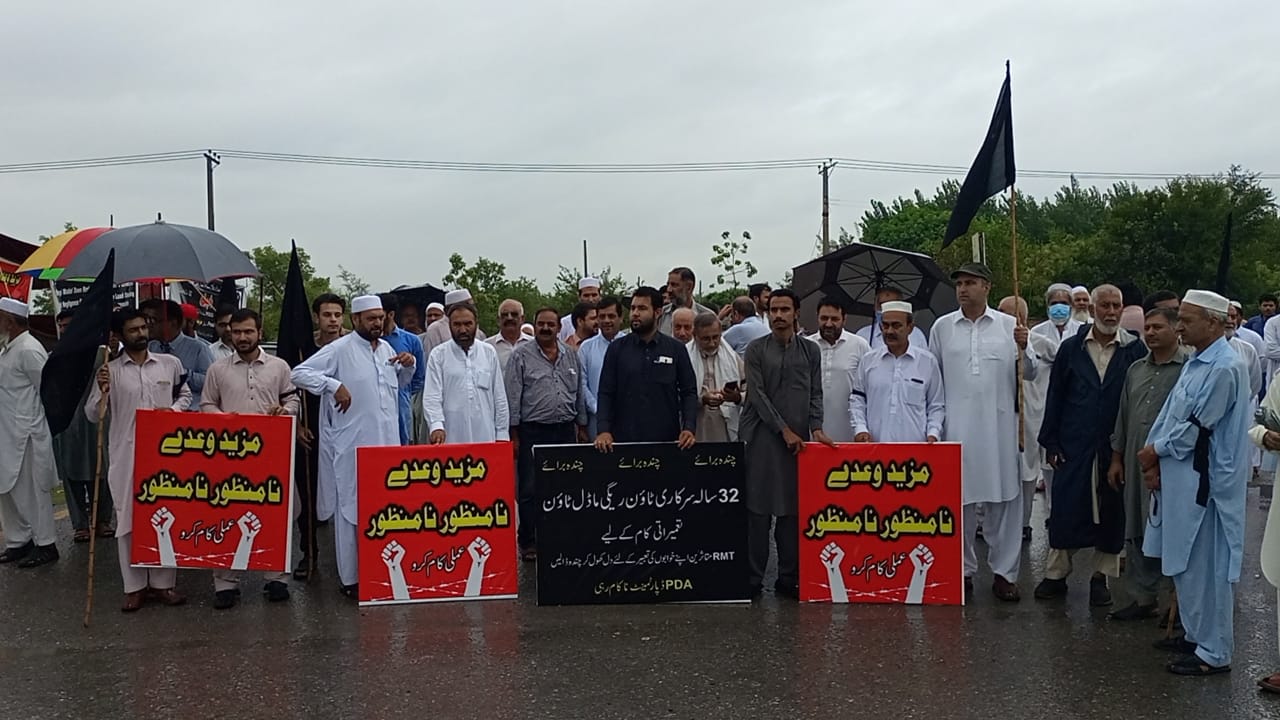 The Forum demands basic facilities which it lacks even after 32 years of the launch.

The protestors blocked main road on the first day while second day camp was arranged on the main entrance of the town. The protectors were angry that the authority has not created or maintained proper civic infrastructure for residents, despite collecting taxes.

The residential township, with a capacity of 27,000 residential plots, was launched in the 1990s and it is stated to be the oldest and biggest residential housing scheme of Khyber Pakhtunkhwa. After many decades, many plot owners of the scheme died with unfulfilled desires of having their own house to live in a serene environment.

On talking to the Sadiqi Akbar, the president of RMT Joint Action Council. He was sitting in the protest camp said that it has been three decades that government has launch this housing scheme but still it lacks basic facilities. He threw light on the main issues said that government failed to execute facilities like the town is facing lack of sign boards, Street allocations, Plot possessions, main grid station, School, Mosques, Play Grounds & Amusement parks, savage system and many more.

He further explains that after many promises of the current government for the development of Regi Model town, the PTI led government even failed to solve Gas tariff issue in the town. ‘The Peshawar development authority (PDA) has submitted and clear their dues decade ago but the government provided RLN Gas instead of Sui Gas whose tariff is double in the price.’ All elected government officials promised to develop the project and provide facilities with proper planning bht due to unknown issues each government at the end just keep itself quite over the issue and fails to deliver for the Regi Model Town project,’ Akbar added.

The PTI government is set to be elected second time in the province, but it didn’t manage to complete remaining development works which were promised. The Pakistan Tehreek-e-Insaf (PTI)-led government has become the fourth provincial government in Khyber Pakhtunkhwa that would leave 32-year old housing scheme of the province – Regi Model Town (RMT) incomplete.

In 2016, Chief Minister Pervez Khattak called a meeting of PDA and representatives of the Save Regi Movement and directed the then director general of PDA Mohammad Salim Watoo to immediately provide facilities to the residents and start construction on schools and hospitals in the township.

In February of the 2020, Kamran Bangash, was the Special Assistant to Chief Minister for Local Government directed Peshawar Development Authority (PDA) to expedite development work in much awaited Regi Model town and resolve all issues.

In June 2020, Chief Minister Mahmood Khan has directed all the relevant departments to devise a plan within 10 days for provision of civic amenities to the Regi Model Township. Despite any action, the government is not interested in developing Regi Model Town.

Among like many, Zaka Ullah, 52, is an active member of protest sitting in the camp. He has owning five Marla plots in Zone 2 said that I was shifted to Regi Model town with an aim to build dream house in government led project but dreams been broken to see the plight of the town as lacking facilities.

Another resident name Zahir Khan has 5 members in their home said that “we have received 80,000 gas bills for a month of February while using only one stove and geezer but due to high bills for RLNG, we unable to submit which lead to dis connectivity of the gas. It is unjustice we never demanded such high-priced gas supply if government is supplying on its own choice then the costing bill should be same as in the entire city of Peshawar.