‘Sadak 2’ is lowest-rated film on IMBd, it’s trailer was most disliked video on YouTube 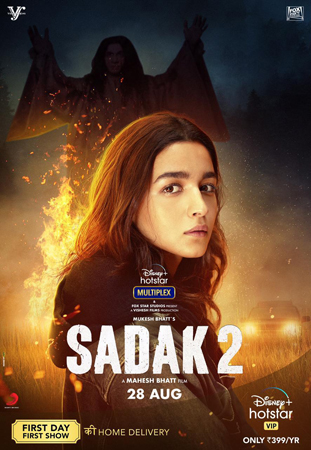 Alia Bhatt’s ‘Sadak 2′, which was the actress’ much-anticipated film, released on Disney+ Hotstar on August 28, but it failed to leave a mark on the audiences.

The movie, which marks the return of filmmaker Mahesh Bhatt as a director, released to poor reviews from the critics too and is the lowest-rated film on IMBd with just 1 star.

‘Sadak 2’ released amid the nepotism debate and faced the wrath of angry netizens. The film has been drawing ire on social media since actor Sushant Singh Rajput’s death on June 14. The insider vs outsider debate reignited on social media with Sushant’s death as a section of the internet believes that he was a victim of “Bollywoood’s nepotistic attitude towards outsiders” as the actor allegedly lost seven films earlier.

The trailer of the film had also received a similar reception. In no time, it was declared the most disliked video on YouTube.

Ahead of the film’s release, Sushant’s brother-in-law had also launched an app named Nepometer to track nepotism in Bollywood. The first film to have been measured in the app was ‘Sadak 2’ and Nepometer found it to be 98% nepotistic and soon, there was a call to boycott the film.