Operation against encroachments around stormwater drains in Karachi kick-starts 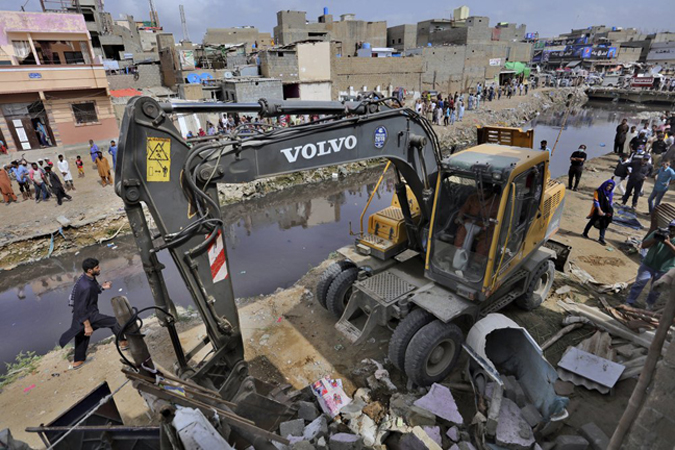 A week after record-breaking torrential rains wreaked havoc on Karachi, the provincial government on Wednesday started an operation against commercial encroachments around the city’s stormwater drains.

Karachi Municipal Corporation (KMC) director anti-encroachment told a private TV channel that the operation began at 8am at three locations in the port city. He said that two anti-encroachment operations were conducted in the area between Cafe Pyala to Teen Hatti and one at a nullah in New Karachi. K-Electric and Sui Gas teams arrived near Cafe Pyala before the operation began. Authorities removed commercial encroachments, such as cattle markets and parking spots alongside the Gujjar nullah to ensure the drain does not get clogged again.

A protest by residents of Liaquatabad FC area began earlier when the deputy commissioner central urged residents to vacate their homes by 7am for the operation. Protesters blocked roads, affecting traffic between Nazimabad and Liaquatabad. However, they ended their protest when police and Sindh government officials reassured them that the operation was being conducted against commercial encroachments and not residential ones.

Karachi Municipal Corporation (KMC) Anti-encroachment Director Bashir Ahmed Siddiqi said the second phase of the drive will begin after providing residents an alternative place to live, he added. “In the first phase, illegal sheds constructed around the drains will be demolished while the second will target houses built illegally,” he said.

North Nazimabad Assistant Commissioner Arsalan Saleem said that the operation was being carried out at three points and would only target “soft encroachments”. Two assistant commissioners are monitoring the drive at each of the three points, he said. “We are also carrying out a survey to determine how many residents live in these areas and what commercial activities are carried out,” he said, adding that the original breadth of Gujjar Nala was 210ft and the plan was to restore the drain to its original design. “But, in the first phase we are only removing soft encroachments,” he reiterated.

Earlier, Sindh government spokesperson Murtaza Wahab said no operation would take place against people’s homes and residences. “The current exercise is against commercial establishments on encroached land,” he said in a tweet while responding to a video which a resident had shared.

KMC officials, equipped with heavy machinery and accompanied by police officials, also carried out the anti-encroachment operation on the banks of Gujjar Nala in Gulberg area. Shaukat Siddiqui, a senior KMC official, told the media that initially soft encroachments were being demolished.

However, residents were less than pleased with the drive during which the boundary walls of some houses were razed. Area residents said such a drive was also carried out a few years ago. They claimed that at the time, they were instructed to move their houses back by 15 feet. Now officials have increased that number to 30 feet, they said.

Residents said K-Electric (KE) had installed meters at their homes and that they were all registered voters for the past 30 to 35 years. Many of them questioned that if their houses were built on encroached land, then why did KE install meters there and why where their votes registered on those addresses.