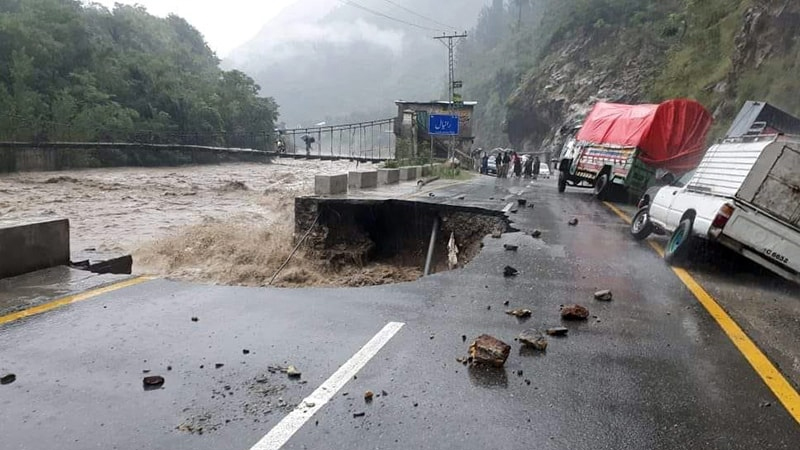 In another incident, the roof of a house collapsed during a wedding in Malak Khel area of Alpuri tehsil where five people were injured. According to Ranjha, due to flooding in streams caused by the heavy rains, the Karakoram Highway (KKH) had been blocked at Shang and other points, while the Bisham-Swat road was washed away near Ranyal suspension bridge, leading to the route’s closure for all traffic. Other important link roads were also blocked or damaged due to the rains. Several animals were also killed when a house collapsed in Chakesar area. The DC Shangla said information regarding rain-related incidents was being collected from different parts of the district.

The KKH was also blocked at several points in Lower and Upper Kohistan, with hundreds of vehicles stuck on roads due to the blockade. Local police said the flood swept away water mills, mini power stations and wooden suspension bridges in Kohistan. A flooding situation was also observed in the Dubair, Pattan and Indus rivers. Upper Kohistan DC Arif Khan Yousafzai urged the public to avoid unnecessary travel in the district to prevent any untoward incident. Torrential rains have disrupted routine life in the Abasin region and the area has been without electricity for more than eight hours.

Similarly, roads in Mansehra district including the Mansehra-Naran road was blocked at several points due to land sliding, ADC Mansehra Maqbool Hussain said. Across KP, the recent rains have left seven houses partially damaged and one completely damaged, the Provincial Disaster Management Authority (PDMA) said in a statement, adding that the people injured in various incidents were swiftly shifted to hospitals. Two houses were damaged in Buner and Shangla each while one house each was damaged in Karak, Lower Kohistan, Swabi and Swat.

The PDMA said rescue and relief efforts were ongoing in the affected areas while the respective district administrations had been directed to assess the losses incurred due to damages. Steps are also being taken to unblock closed roads, it added. The river water at Trimmu Headworks was surging amid reports of flooding at Chenab and Jhelum rivers on Tuesday. Over 200 villages have been inundated in floodwater of Chenab and Jhelum rivers and several people have stranded in flooding at scores of settlements in Jhang district, reports said.

The relief workers facing hardships and hurdles due to continuous rainfall in the area.