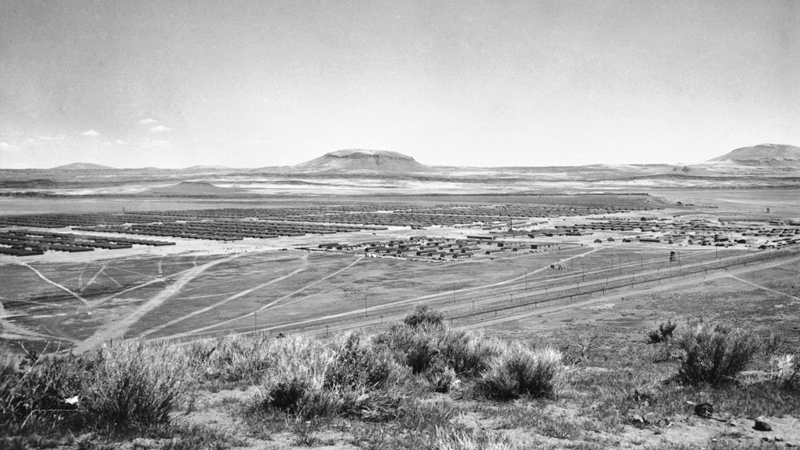 When Japan bombed Pearl Harbor in 1941, the first thing Hidekazu Tamura, a Japanese American living in California, thought was, “I’ll be killed at the hands of my fellow Americans.” It wouldn’t be the last time he felt that way.

At 99, amid commemorations of Wednesday’s 75th anniversary of the formal Sept. 2, 1945, surrender ceremony that ended World War II, Tamura has vivid memories of his time locked up with thousands of other Japanese Americans in US internment camps. Torn between two warring nationalities, the experience led him to refuse a loyalty pledge to the United States, renounce his American citizenship and return to Japan.

“I have too many stories to tell,” he chuckles in an interview with The Associated Press.

Born in Los Angeles to Japanese farmers, his parents earned enough money to return to Japan in just a few years, buying a farm near Osaka.

Against his family’s wishes, Tamura moved back to the United States alone in 1938 when he was 17, after his dream of becoming an aircraft pilot was crushed when he failed an eye exam. The United States, he hoped, would provide him the same opportunities his parents received.

But Tamura arrived in California amid rising discrimination against Asians, and Japanese in particular. His uncle, who ran a grocery store, once drove him to a fancy hilltop restaurant in San Francisco and showed him a sign outside that read, “Orientals Not Allowed.” “You won’t ever go in there until you die,” his uncle told him. “That’s the sort of country this is, (it) discriminates against Japanese.”

“I saw that and thought, ‘Bloody hell!’ And that awakened me as a Japanese,” he said.

When the war began, Tamura was finishing his college studies in aircraft engineering. But in February 1942, President Franklin D. Roosevelt signed an order that led to the incarceration of an estimated 120,000 people with Japanese ancestry, including those, like Tamura, with US citizenship.

The questions divided the Japanese community between those seen as loyal to the United States and those loyal to Japan. The split caused fights and even killings in the camps.

Many men answered “yes” to both questions, enlisting to fight in the US military abroad even as their families were stripped of their property and locked in the camps.

Tamura said he answered “no” to both questions. He was sent to Tule Lake, a segregation center for those deemed disloyal, where he joined a group called “Hokoku Seinen Dan,” which means, “Young Men’s Association to Serve the Fatherland.”

The group was initially meant to educate and prepare US-born, second-generation Japanese Americans, many of whom had never been to Japan, for an uncertain future, including possible deportation, according to Sachiko Takita-Ishii, professor of Sociology at the Yokohama City University. As war raged, some members began to feel betrayed by the United States and took to demonstrations, the professor said.

For a time, Tamura said he served as spokesman for the group, whose activities were eventually seen as subversive by the US government.

Hundreds of its members would march around the outer perimeter of the camps at dawn, with white headbands and shaved heads, a symbol of devotion to Japan.

As they marched, Tamura could see US military guards aiming their machine guns at them. “They were itching to shoot at us,” he said.

At a meeting with US officials, Tamura said he was told that the American guards had just returned from war and “hated the Japanese,” and that the safety of group members couldn’t be guaranteed if they continued to march.

Looking back, Tamura admits the marches were dangerous, but patriotism had inspired the young members of the group, which Tamura said numbered around 500 during the time he was there.

“It’s war with Japan, so we thought we’d be killed eventually anyway,” he said, by way of explanation of his risky activities in the camps. Secretly, Tamura hoped the Japanese military would rescue him from the camps.

US administrators at the time called the group “subversive” and “traitors.”

Barbara Takei, a board member of the Tule Lake Committee, a non-profit group dedicated to preserving the history of the camp, and an independent researcher and activist, said in an email that such groups “were demonized by the white administrators as disloyal, even subversive, helping to validate the lie of military necessity (that) justified the wartime incarceration.”

“If that incarceration had been a little more humane, there probably wouldn’t have been a large number of protests,” said Hiroshi Shimizu, president of the Tule Lake Committee, but there were few other outlets for dissenters.

While at Tule Lake, Tamura and a group of others were branded as troublemakers and transferred to the higher security Santa Fe Internment Camp. It was his fourth and last camp.

Government records show that Tamura was at Tule Lake starting Oct. 8, 1943, and was sent to Santa Fe Internment Camp on Dec. 27, 1944. Records provided by the Tule Lake Committee show Tamura was a member of the Hokoku Seinen Dan’s leadership.

At Santa Fe, he heard the Japanese emperor’s mid-August surrender broadcast while listening to a handmade radio. But Tamura wasn’t convinced the war was over and thought the address was propaganda.

He still didn’t believe the war had ended when he was released from Santa Fe and boarded a ship in Seattle in November 1945 for the two-week trip back to Japan.

On his 25th birthday, in December 1945, he arrived at the Japanese port of Uraga and asked a woman cooking over a clay stove on the street, “Did Japan win?”