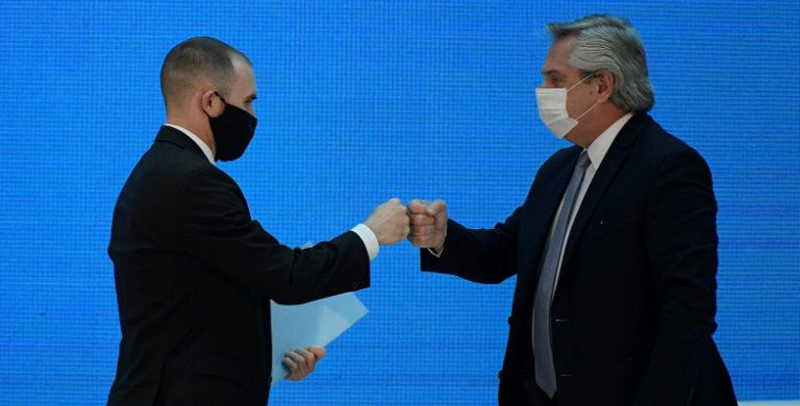 The news comes approximately a month after Argentina reached an agreement with three major creditor groups to renegotiate the terms of the debt following months of strained talks and several missed deadlines.

“There has been massive acceptance, thanks to the dialogue process,” said Guzman, speaking alongside President Alberto Fernandez and Vice President Cristina Kirchner.

Guzman said that the deal meant Argentina would benefit from $37.7 billion in debt relief while its annual interest rate will drop from seven percent to three percent.

“This gives us a sufficient economic timeframe to generate sustainable policies and allow development,” said Guzman.

The high acceptance rate also lifts the specter of litigation by speculative funds, which have successfully sued the country in the past.

“We’ve come out of the labyrinth,” said Fernandez. “We don’t want to condemn any more Argentines to groveling.”

As for the remaining one percent, “this debt will surely be paid,” said Matias Rajnerman, an analyst at Ecolatina.

The deal, reached on August 4, is worth 54.8 cents on the dollar, a significant increase on Argentina’s original offer of 39 cents.

The bonds represent roughly a fifth of the country’s $324 billion in debt, which amounts to around 90 percent of its GDP.

The country is also waiting to find out this week how many creditors involved in a $41.7 billion debt under local legislation will sign on to a restructuring deal with the same conditions.

Last week, Argentina formally opened consultations with the International Monetary Fund to agree new terms on the repayment of a $44 billion bailout loan agreed in 2018. The loan was due to be worth $57 billion but center-left Fernandez refused the remaining disbursements when he took power in December 2018. The loan had been agreed by his liberal predecessor Mauricio Macri.

Argentina, which is in the midst of an economic crisis and has been in recession since 2018, is due to start repaying that debt in September 2021.

“Unlike its neighboring countries, Argentina didn’t go to the Fund in the midst of the (coronavirus) pandemic,” economist Marina Dal Poggetto from the EcoGo consultancy, told AFP.

“What that means is the government wants to refinance the repayments.”

It has been in default — for the ninth time in its history — since May 22 when the country missed a deadline to pay $500 million in interest on the debt that is subject to the current negotiation.