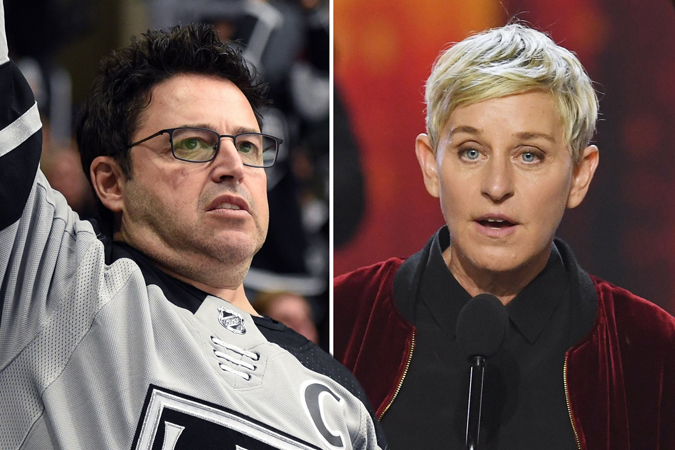 The 53-year-old returned to Instagram for the first time in more than a month on Sunday, Aug. 30 and posted a video in which he candidly addressed his followers.

“Oh, look who it is. If it isn’t Andy Lassner. Well, yes it is. Your eyes do not deceive you,” he began. “I’m back. I’ve been away for a little bit dealing with, you know, some stuff. You may have read about it.”

Lassner then acknowledged “it’s been a couple of rough months.” “But it’s when we go through these things, I guess, that we learn the most about ourselves and maybe even some growth,” he added. “But to tell you it hasn’t been rough would be a lie, and I’ve always been honest with you. So, it’s been rough.”

Near the end of the video, he reiterated that he’s “back” and that he’d be returning to his “slow walking” program fans had seen on the show.

Lassner then acknowledged ‘it’s been a couple of rough months’

“Because, I mean, let’s face it, what is life when you’re not slow walking with Andy?” he said. “Anyways, I love you guys, I miss ya and I’ll talk to you soon.”

The post came less than two weeks after a spokesperson for Warner Bros. told E! News executive producers Ed Glavin and Kevin Leman and co-executive producer Jonathan Norman had “parted ways” with the talk show and about a month after the launch of an internal investigation was first announced.

The investigation followed a mid-July report by BuzzFeed News in which one current and 10 former employees of The Ellen DeGeneres Show came forward anonymously with allegations about their time at the program, including claims of a “toxic” work environment. For instance, a woman told the outlet she experienced microaggressions during her year and a half as an employee, and other accusers alleged they faced intimidation. BuzzFeed News also published a separate report at the end of July in which “dozens” of former employees accused executive producers of sexual misconduct or harassment. E! News did not names these specific producers. One of the producers denied “any kind of sexual impropriety” and another is “100 percent categorically denying” the accusations. A third producer did not respond to a request for comment.

Following the BuzzFeed News reports, a source who used to work at The Ellen DeGeneres Show shared a different perspective.

“There were definitely inappropriate things said. I wasn’t ever offended. I never felt any malice,” the source told E! News. “I don’t really have anything dramatic or outstanding in my time there. Having to stay after all the EPs left for the day, often times they were just shooting the s–t until after 8pm. People getting yelled at because white boards weren’t done properly. That kind of stuff but not abusive. Inappropriate things were said that in this climate you can’t say now.”

According to Variety, the announcement regarding Glavin, Leman and Norman’s parting with the show was announced during a video call with staff earlier this month and that the results of the investigation were shared by Lassner and executive producer Mary Connelly during the call, as well.

Variety reported more than 100 people connected to the show were interviewed and that the investigation found there was no evidence of “systemic” racism; however, the publication wrote the probe determined more needed to be done in terms of diversity and inclusion.

Warner Bros. declined to comment on the specific investigation results but shared a statement near the beginning of the month.

“The Ellen DeGeneres Show is, and has always strived to be, a place that brings positivity to the world,” part of it read. “And though not all of the allegations were corroborated, we are disappointed that the primary findings of the investigation indicated some deficiencies related to the show’s day-to-day management. We have identified several staffing changes, along with appropriate measures to address the issues that have been raised and are taking the first steps to implement them. Warner Bros. and Ellen DeGeneres are all committed to ensuring a workplace based on respect and inclusion. We are confident this course of action will lead us to the right way forward for the show.”

E! News also confirmed that Stephen “tWitch” Boss has been promoted to co-executive producer. According to Variety, Connelly, Lassner and Derek Westervelt will remain as executive producers, as well. Variety, citing a source familiar with the program, reported The Ellen DeGeneres Show has also since implemented new benefits for employees, including increased paid time off. DeGeneres, who did not have claims made against her, also issued an apology to her staff.

“Some former employees are happy to hear about the changes,” a source also told E! News. “After all, people spoke out in the first place because they wanted current staffers to have a better working experience It will be interesting to see how the season goes on.” The Ellen DeGeneres Show is scheduled to return to the air Sept. 9.