* Protesters demand clean-up work, call for audit of funds collected in the name of flood relief 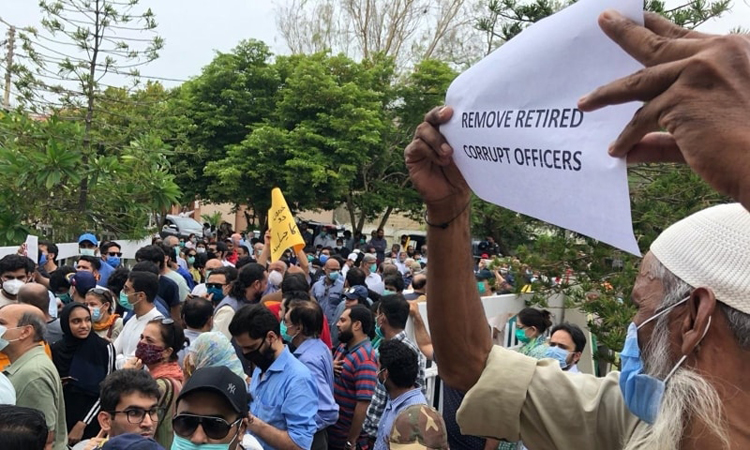 The suffering of scores of Karachiites saw no end on Monday as parts of the city remained waterlogged and without power, an agonising five days after record-breaking rainfall caused widespread devastation in the metropolis.

Frustrated by the lack of action by departments concerned, residents of the DHA and Clifton localities gathered outside the Cantonment Board Clifton (CBC) office to protest against the post-rain situation in their areas. The demonstration began shortly after noon.

The protesters, carrying placards and chanting slogans, demanded that the drainage system in the areas be improved and roads be repaired and made from scratch. They called upon the CBC chief executive officer to address their concerns.

Protesters also called for an audit of the funds collected in the name of flood relief and called for the board to ensure clean-up work.

Some of the other demands included the resignation of the CBC head and the DHA administrator, for areas to be drained within the next three days, electricity and gas to be restored in all phases within the next 24 hours and spraying to be carried out against mosquitoes.

Footage from the protest also showed citizens attempting to storm the CBC office before being stopped by police officials.

A protest participant said that the CBC CEO showed up “after two hours” and left after two minutes of addressing the protesters amid booing from the participants.

According to Geo News, some of the protesters were later called into the CBC office to discuss the demands put forth by the residents, following which the demonstration ended.

Meanwhile, sharing an update at 5pm, lawyer and activist Jibran Nasir said the Bukhari Commercial area remained an “endless lake” despite 18-hour efforts by him and others to drain the water in the area.

He said DHA’s tankers were present at the site but they did not have suction machines or other equipment.

Nasir further said the CBC still “remained clueless” as to which points of nullahs had to be unclogged, adding that the issue would have been resolved in a day or two instead of four or five days if the CBC had acted in a timely manner.

Sindh government spokesman Murtaza Wahab said that the provincial government had placed its machines at Khayaban-e-Muhafiz and Khayaban-e-Shujaat to drain out the rainwater from Bukhari Commercial.

“We are facing difficulties with the drains at DHA but are trying our best,” he said. He added that the Sindh government had deployed more machines to help drain the rainwater in DHA.

Wahab later said that there was “too much water in DHA”. The Sindh government is trying to drain water from Khayaban-e-Muhafiz, Khayaban-e-Shujaat and Khayaban-e-Bukhari right now, he said in a tweet.

He said that small pumps and bowsers being used in DHA would take “forever” to clear the areas.

“Such pumps need to be placed since the quantity of water is too huge,” he said, sharing a video of a larger machine. “One machine has already been placed by the provincial government and three more such machines are being made [available] for various areas of Karachi.”

In a statement, K-Electric (KE) said its field teams and operational staff were working round the clock to restore power to areas still plagued by waterlogging and drainage issues.

“Despite hurdles and impediments to restoration work because of standing rainwater in several parts of DHA and Clifton, KE has been able to re-energise more than 95 per cent of the city.”

The company added that efforts were underway to re-energise five feeders in DHA and Clifton, adding that waterlogging around substations and inside residential premises was proving to be a hurdle, creating a public safety hazard.

The power utility reiterated that they had also received “several requests” by residents to refrain from powering up feeders in the “interest of saving human lives”.