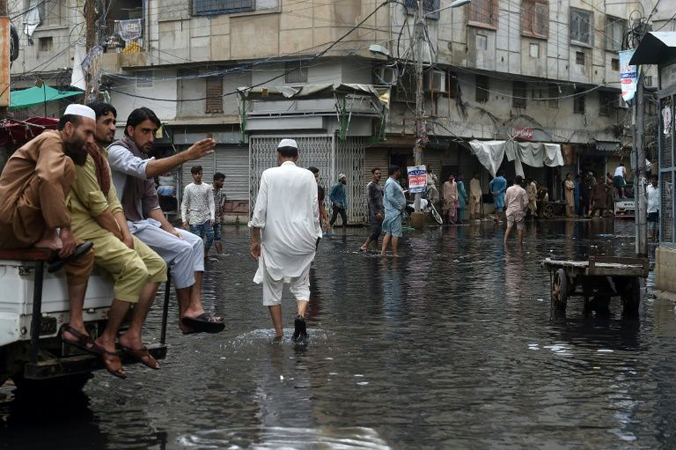 Successive days of storms have exposed the longstanding failures of Karachi’s neglected and overwhelmed drainage system, and residents used a welcome break in the rain to vent their fury at what they see as gross mismanagement of municipal resources.

“Everything got ruined in my basement, with about three metres of water inside. The water is a mix of rain and sewage water. It is the fifth day and we are suffering horribly,” housewife Lubna Salman, who lives in an upscale Karachi neighbourhood managed by the military, told AFP.

Salman and other angry residents gathered outside local authority buildings to blast officials for failing to fix drainage problems in the city of 20 million people.

Karachi last week saw a record 230mm (nine inches) of rain, compared to the average of 130mm for the time of year, according to the city’s meteorological service.

Videos and images on social media regularly show builders dumping rubble into drainage canals, while shoddy new buildings are erected with scant regard for their effect on maxed-out sewer lines.

With a population of only 500,000 in 1947, Karachi has seen its population mushroom “without investing in invisible infrastructure (pipes and sewerage) for more than 30 years,” Karachi-based urban planning professor Nauman Ahmed said.

During a single day last week, 18 Karachi residents died from flood-related incidents. The water was so deep in places that children were seen swimming in the streets.

More than 100 Pakistanis died in August because of the monsoon, which has also destroyed more than 1,000 homes.

In the central Indian state of Madhya Pradesh, at least 10 people died in rain-related incidents over the weekend, the Press Trust of India news agency reported. The Indian air force helped evacuate stranded villagers Sunday, with images showing families being winched up in the badly affected Chindwara district.

Rescue workers and the army have evacuated more than 10,000 people in the state so far.

The monsoon, which usually lasts from June to September, is essential for irrigating crops and replenishing water supplies across the Indian subcontinent, home to one-fifth of the world’s population.