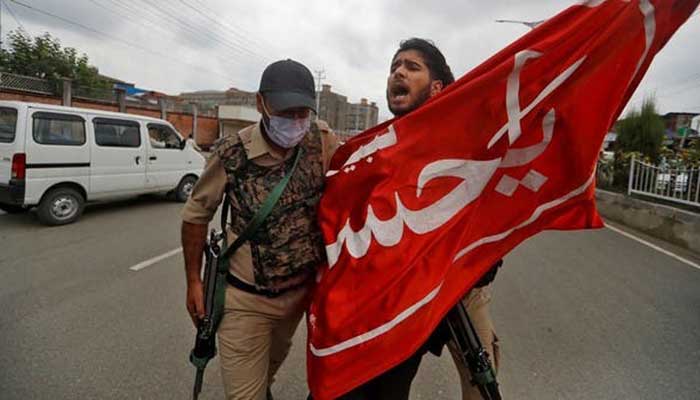 Indian authorities had reimposed the ban on Thursday after clashes with mourners who wanted to stage traditional processions for during the holy month.

Jafar Ali, a witness, told AFP that the procession started in the Bemina area on the outskirts of the main city of Srinagar and that government forces were present in heavy numbers.

Ali and other people who witnessed the clashes said security forces fired pellets and tear gas shells to break up the gathering.

“The forces fired pellets at the procession that was mainly peaceful and included women,” said another witness Iqbal Ahmad.

At least 40 people were injured, according to witnesses.

About 25 people were taken to a nearby clinic with pellet wounds, some with their faces and bodies covered in pellet marks, a doctor there told AFP on condition of anonymity.

“We moved about a dozen people to other facilities for more advanced treatment,” the doctor said.

A police official confirmed the incident, saying: “Some people had gathered and were trying to start a procession, they were dispersed.” He did not give details of casualties.

Muharram processions to mourn Imam Hussain, the grandson of Holy Prophet Muhammad (Peace Be Upon Him) who was martyred in a battle about 1400 years ago at Karbala, are held around the world but have been regularly banned in occupied Kashmir since an uprising erupted in 1989.

The Muslim-majority Himalayan region is largely divided between India and Pakistan, who both claim it in its entirety and have fought two wars over it.

Last year India took away the semi-autonomous status granted to its side of the territory. Tensions have risen since.

Muslims in the procession chanted pro-separatist and an anti-Indian slogans, other witnesses said.

Several arrests have been made this week of people shouting against Indian rule when processions have been attempted, a police official said. Some have been charged under anti-terrorism laws.