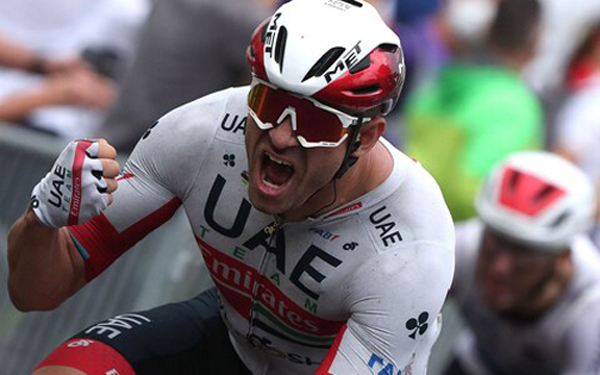 NICE: Alexander Kristoff won the opening stage of the Tour de France while Thibaut Pinot, who is hoping to end the home nation’s 35-year wait for a local champion, was one of several riders to take a tumble during a rain-hit ride on Saturday. Norway’s Kristoff outsprinted Danish world champion Mads Pedersen after 156 km around Nice. Pinot trailed by some distance but was credited with the same time as the winner since the massive crash occurred within three kilometres of the finish line on the Promenade des Anglais. “For the moment he’s fine, but you always need to wait a few days to see if there’s been consequences or not,” Pinot’s sports director at Groupama-FDJ, Philippe Mauduit, said. Dutchman Cees Bol finished third.

Colombian Nairo Quintana, twice a Tour runner-up, fell earlier while Pavel Sivakov, one of defending champion Egan Bernal’s key lieutenants, hit the ground twice. Pre-stage favourites Sam Bennett, Caleb Ewan and Giacomo Nizzolo also crashed on slippery roads as rain wreaked havoc during the stage. Organisers postponed the start of the Tour de France by several weeks due to the COVID-19 pandemic. The race got off to an eventful start as rain made the roads extremely slippery. “There must have been 100 riders crashing. Everyone struggles, everyone got scared,” said Pinot’s team mate Valentin Madouas. “It was like an ice rink.”

The multiple incidents had prompted the Jumbo Visma team to ask the peloton to take it slow in a descent, but Astana refused to take the foot off the gas pedal. Their decision backfired, however, as their team leader Miguel Angel Lopez aquaplaned head first into a road sign. The Colombian got back on his bike. In another descent, Primoz Roglic’s team mate George Bennett also crashed, meaning riders from the top two teams – Jumbo Visma and Ineos Grenadiers – were nursing bruises after the first day. Pinot, who is considered as one of the title contenders behind favourites Roglic and Bernal, sustained bruises on his leg and shoulder. The race started in front of scarce crowds in central Nice amid fears of a coronavirus second wave as the number of daily cases has been rising within France at an alarming rate in recent weeks.

Riders and their staff are part of a race bubble in order to minimise risks of infections and French health authorities on Saturday imposed stricter regulations in the event of coronavirus cases. They ruled that a team should be withdrawn if two or more of its members — including riders and support staff — tested positive within seven days, race organisers said on Saturday. Riders, however, put on a brave face.