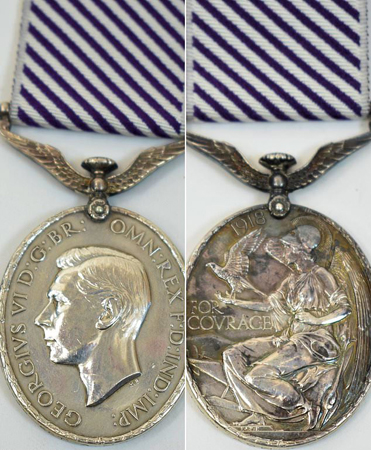 A Second World War medal stolen 20 years ago has been unearthed at an auction 350 miles away. RAF Sergeant Arthur Moy was awarded the Distinguished Flying Medal by King George VI in September 1943.

He earned the distinction for gallantry and devotion to duty during air operations in the war.

The medal bears the inscription “for courage” next to a figure of Athena Nike seated on an plane with a hawk perched on her hand.

The face of George VI is pictured on the other side.

The medal was feared lost after it was reported stolen from a property in East Sussex in 2000.

However an eagle-eyed member of the public who collects and researches military items noticed it for sale at an auction in Newcastle.

They reported it to Sussex Police, who are now trying to trace the medal’s owner.

Pc Michelle Holdstock said: “We’re enormously grateful to this member of the public for reporting this stolen item to us and we are keen to reunite it with its rightful owner.

“We do not know where this medal has been over the last 20 years and hope that by releasing these images we may help jog someone’s memory. “If you recognise this medal or have any information that may assist with our inquiries please report online or call 101, quoting 185 of 14/08.”