Muharram 9 processions taken out across country amid strict security 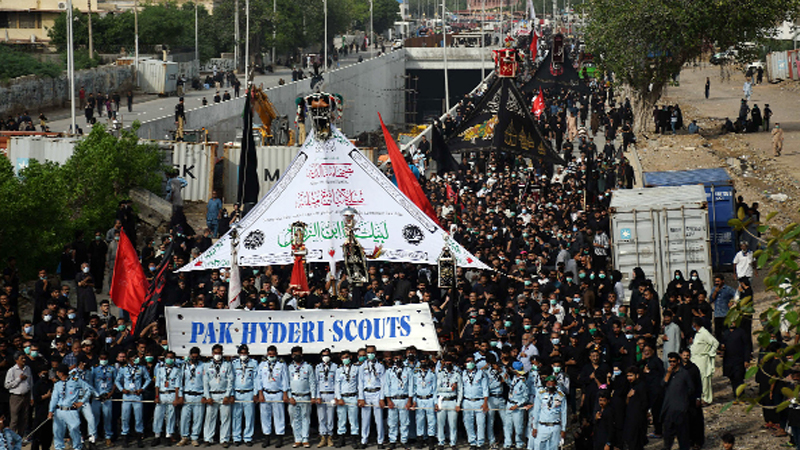 Strict security arrangements were made countrywide and cellular services remained suspended in some areas as processions to commemorate Muharram 9 were taken out in several cities on Saturday. Earlier this week, Ministry of Interior officials said that cellular services would be suspended in 36 cities of Punjab on the request of the provincial government.

The Punjab police had also asked the Home Department for air surveillance in 13 cities – Lahore, Kasur, Gujranwala, Mandi Bahauddin, Rawalpindi, Jhelum, Sargodha, Bhakkar, Multan, Lodhran, Sahiwal, Muzaffargarh and Bahawalpur. Sindh government spokesperson Barrister Murtaza Wahab said in a tweet on Friday that cell phone services would be restricted “only be in selected areas where the Muharram processions take place on the 9th and 10th of Muharram”.

Cellular services were also suspended in Peshawar as part of the security plan, while over 10,500 police and security personnel were deployed across the city for the security of mourning processions, police officials said.

The main procession in the metropolis emerged from Nishtar Park at 1pm, going through Mehfil-i-Shah-i-Khorasan and will end at Hussainian Iranian Imambargah in Kharadar.

The main majlis was led by Allama Shahenshah Hussain Naqvi and the procession went through MA Jinnah Road and Empress Market. A spokesperson for the Karachi Police said that at least 6,368 policemen were posted along the route the procession took while 90 snipers of the Special Security Unit (SSU) were also posted at the Imambargahs and along the route. The spokesperson added that 1,095 officials of the Traffic Police had been deployed to ensure smooth flow of traffic along the route. Police have appealed to the citizens to keep an eye on their surroundings and contact the police helpline in case of any suspicious situation.

The main procession in Lahore was taken out from Pando Street, Islampura which after passing through different areas including Khaima-i-Saadat will conclude at the same point, Radio Pakistan reported.

Chief Traffic Officer Capt (r) Syed Hammad Abid said that foolproof traffic arrangements have been made for the processions on Muharram 9 and 10. In a statement, he said that two superintendents, six deputy superintendents, 72 inspectors, hundreds of women traffic wardens and 1,390 traffic wardens would perform their duties along the route of the main procession. “Citizens can get information through Rasta App, Radio FM-88.6 and police helpline 15,” the statement added.