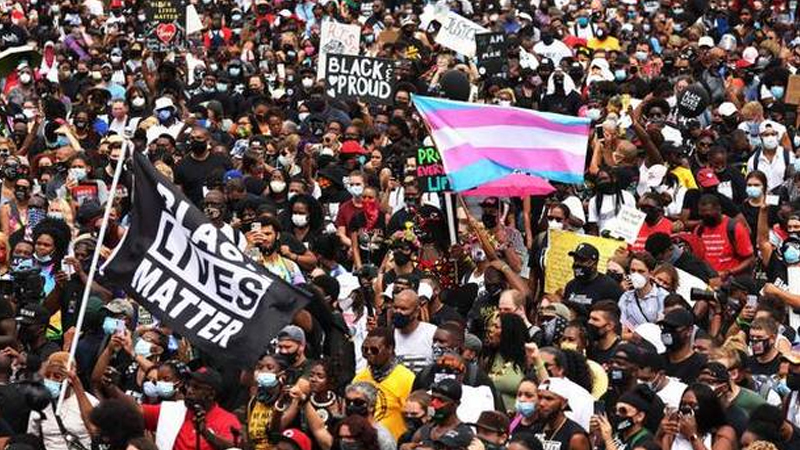 Tens of thousands of protesters demanding an end to racial injustice and police brutality thronged the US capital on Friday, sign of a renewed groundswell of anger gripping the nation following a white officer’s shooting of African American Jacob Blake.

Huge crowds flooded the National Mall for a mass march marking the anniversary of Rev. Martin Luther King’s historic “I have a dream” speech, delivered at the Lincoln Memorial on August 28, 1963.

Friday’s demonstration was dubbed “Get Your Knee Off Our Necks,” in reference to George Floyd, who suffocated beneath the knee of a white officer in Minneapolis in May, igniting the most widespread civil unrest in the country in decades.

Often fighting back tears, relatives of Floyd, Blake and Breonna Taylor — a 26-year-old killed in a police shooting in her own apartment — took turns addressing the sea of people, who called out the victims’ names in reponse, over and over.

“What we need is change and we’re at a point where we can get that change,” said Taylor’s mother, Tamika Palmer. “But we have to stand together.”

Like his father did 57 years ago, King’s son, Martin Luther King III, stood on the steps of the Lincoln Memorial before the vast crowd lining a reflecting pool and urged Americans to keep fighting inequality between whites and people of color — and to vote in November at all cost to defeat President Donald Trump.

“We are taking a step forward on America’s rocky but righteous journey towards justice,” King told a crowd enduring muggy Washington heat, at times wiping sweat from his brow.

“We’re marching to overcome what my father called the triple evils of poverty, racism and violence,” King said.

The same spot was the scene of a lavish fireworks display the night before, as Trump wrapped up the Republican Party’s pre-election convention with an angry “law and order” speech at the nearby White House.

Thousands of people, among them many families with children, streamed towards the event from dawn, with Covid-19 facemasks mandatory — but planned temperature checks abandoned due to long queues and large crowds.

After the speeches, the crowd set off in direction of the nearby Martin Luther King Memorial.

Local store front windows were boarded up due to the threat of violence, and a heavy police presence blocked off streets. As she headed toward the Mall, Karisha Harvey, 46 and black, held a poster depicting a weeping Statue of Liberty cradling a crying baby swaddled in American flag.

Her white companion Cortney Smith, white and also 46, said, “I’m sick of hearing about a black man getting killed in the street every week.”