Chrissy says her ‘tongue is falling off’ after eating sour candy

* 'Fair warning: Do not continue this video if you are squeamish,' Teigen told her followers 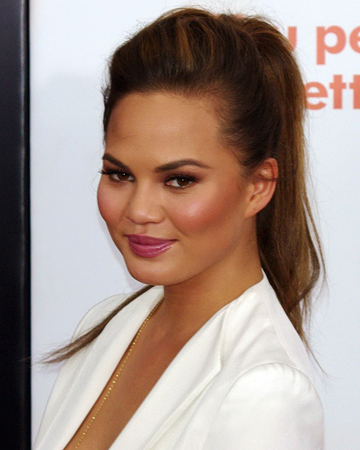 Careful, Chrissy Teigen! The 34-year-old cookbook author took to Instagram Stories on Aug. 28 to reveal the impact one pregnancy craving has had on her tongue.

“Fair warning: Do not continue this video if you are squeamish,” Teigen told her followers. “I told you I’m eating so much sour candy that my tongue is falling off, and it is.”

Teigen then opened her mouth to reveal the evidence. She also held up her fingers to show the bits that had gotten on her fingers.

“[It’s] literally falling off because I eat so much in the night,” Teigen continued. “I eat sour straws-I suck on them-and then after them I have my Blow Pops. And it’s just falling off, my tongue.”

The apparent tongue peeling even prevented the Chrissy’s Court star from enjoying her bowl of noodles.

“I’m trying to eat my noodles, but it’s so painful,” she said. “It’s hard to eat anything hot, spicy especially, but even just hot temperature. I don’t know how to eat it. I’m about to put Saran Wrap around my tongue or something, like a tongue condom of some sort. Ow, it hurts.”

Teigen then opened her mouth to reveal the evidence. She also held up her fingers to show the bits that had gotten on her fingers

This wasn’t the first time Teigen had opened up about her love of sweets. Earlier this week, she tweeted that she’s a “crazy candy freak” and asked her followers for suggestions. She also recently posted a video of the Blow Pops package on her nightstand.

Teigen announced her pregnancy at the end of the music video for John Legend’s song “Wild.”

“We’re very excited,” her 41-year-old hubby told Today earlier this month. “It was a surprise, a little quarantine surprise I guess you could say.”

Since then, Teigen has continued to keep her fans updated. From sharing the story of how she discovered she’s pregnant to posting photos of her baby bump, Teigen has posted several aspects of her journey.

The Cravings author and EGOT winner are already the proud parents to two children: 4-year-old daughter Luna and 2-year-old son Miles. But in just a few months, they’ll be a family of five. Until then, feel better Chrissy!