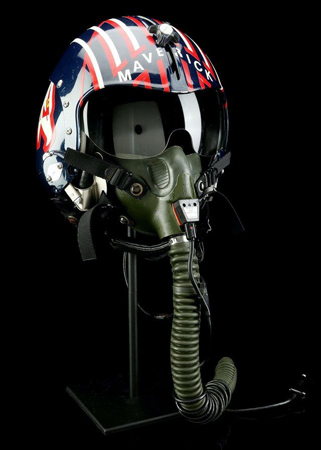 A fighter pilot helmet worn by Tom Cruise in Top Gun has sold for £250,000 at auction. The prop from the 1986 action film, which sees Cruise star as a pilot named Pete “Maverick” Mitchell, was sold for more than five times its pre-sale estimate. It went under the hammer alongside a number of other items of film memorabilia at an auction in the Prop Store’s Entertainment Memorabilia Live Auction, which fetched a total of £4.75 million. A Darth Vader costume used for promotional purposes for Star Wars: A New Hope was sold in the Los Angeles auction for £221,000. A stormtrooper helmet which was also used in Star Wars: A New Hope sold for £105,700. A trainer worn by Michael J Fox in Back To The Future Part II when he played Marty McFly went for £26,400. Brandon Alinger, Prop Store’s chief operating officer, said the auction was a “resounding success”.