Rains cause devastation in parts of KP and Punjab; dozens lose lives 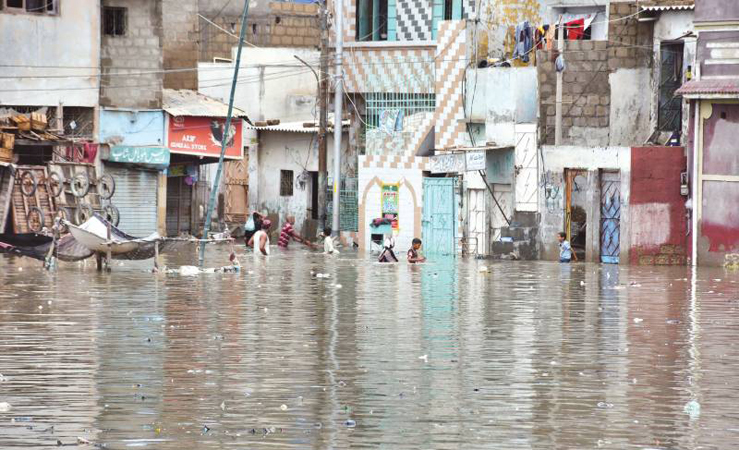 The monsoon rains which have wreaked havoc on Karachi have also caused devastation in parts of Khyber Pakhtunkhwa and Punjab provinces, claiming the lives of over two dozen people and injuring may others, officials said on Friday.

At least nine people including two children lost lives in three separate rain-related incidents in Punjab during the last 24 hours. In Kot Radha Kishan, five people were killed as roof of a house collapsed, rescue sources said. The bodies were retrieved from the debris and shifted to a nearby hospital for autopsy.

Another roof collapse incident was reported in Gujranwala amid heavy downpour. Rescue sources said two children lost their lives in Tehsil Wazirabad as the roof of their house caved in. Meanwhile, two people died and three other were trapped under the debris after roof of a house situated at Lahore’s Bund Road collapsed. Rescue teams reached the spot and carried out relief activities.

Heavy rainfall continues in different parts of Punjab resulting in several roads flooded with water, causing difficulties for the people. Over 45 feeders of the Lahore Electricity Supply Company (LESCO) tripped on Friday, cutting power supply to several areas of the provincial metropolis. Traffic flow remained disrupted in the areas where streets were flooded with rainwater. The Met Office predicted that intermittent monsoon rains will continue in Lahore till Sunday.

According to the KP Provincial Disaster Management Authority (PDMA), eight people died in Upper Kohistan, six in Swat and two in Shangla. The rains also partially damaged 25 homes while 29 others were completely wrecked, the authority said, adding that the PDMA director general and the Rescue 1122 director general were reviewing rescue and relief operations.

Relief operations were underway in affected areas and necessary aid had been distributed to those affected in Swat, Chitral and Shahgram, the PDMA said. “Work on clearing blocked roads is also underway,” it said. The authority is in contact with all district administrations and the PDMA’s emergency operation centre is also fully functional, it added.

PDMA spokesperson Taimur Ali stated that the secretary relief and the director general, along with a team, had left for Swat to monitor relief activities, adding that food items and other essentials were being distributed among those affected by the floods. However, locals in flood-hit areas told a different story when relating their ordeal. “We spent the whole night under an open sky on a mountain,” said Ataullah, a resident of Reshun village in Upper Chitral. He added that the main connecting bridge and his home were completely swept away by the floods. “We have lost everything to the floods. We are looking towards the government and the government is nowhere to be found,” he said, adding that the residents were also facing a shortage of drinking water.

Meanwhile, Upper Kohistan Deputy Commissioner Arif Khan Yousufzai said that seven members of a family had drowned due to severe flooding in the area, which left 19 houses damaged. “Rescue 1122 teams and district administration officials are at the site,” he said, adding that more information on casualties and damages was being collected. He stated that the incident took place in a remote area. Locals also helped in the rescue operation but only three bodies have been recovered so far, he said.