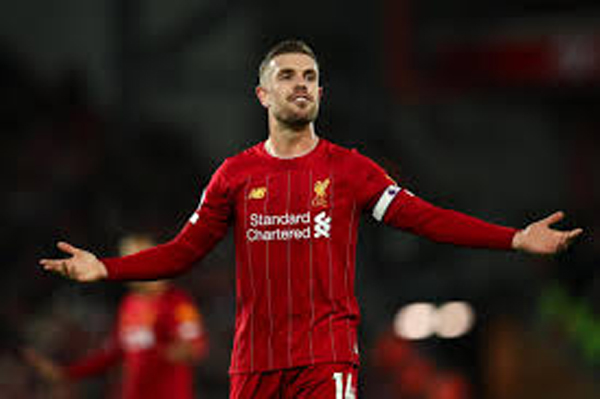 LONDON: Jordan Henderson has urged Liverpool to show their hunger to retain the Premier League title when they face Arsenal in the Community Shield on Saturday. Just five weeks after Liverpool captain Henderson lifted the Premier League trophy, Jurgen Klopp’s side kick off the new season in the glamour friendly at Wembley. While their Premier League title defence doesn’t get underway until September 12, the Reds are keen to lay down an early marker to their title rivals. Henderson knows FA Cup winners Arsenal will pose a good test of Liverpool’s desire for more silverware after beating the champions 2-1 at the Emirates Stadium late last season.

Liverpool have been getting back to business at a training camp in Austria and England midfielder Henderson is pleased with the attitude he has seen from his team-mates so far. “We’ve been cracking on, really working hard. New season, new start and a lot more things we want to go on and achieve,” Henderson told Liverpool’s website. “I’m really excited to see what we can do this season, another big season for us. Hopefully we can take confidence from the last year or two but we need to stay hungry and need to keep the desire to go and want more.

“I can certainly see that from the first days that I’ve watched training in pre-season.” Having ended the club’s 30-year wait to win the English title, just a year after clinching the Champions League crown, it would be understandable if Henderson and company took their foot off the gas this term. Klopp has yet to make any major new signings and they will face a renewed challenge from Manchester City, big-spending Chelsea and Manchester United’s emerging young side. But Henderson, whose team finished 18 points ahead of second-placed City, has no doubts Liverpool are up to the task of keeping their rivals at bay.

‘Always wanting more’: “You’ve got to look at the players in the squad and the manager as well, it’s always about looking forward and wanting more and improving,” he said. “Just to keep going and win as many trophies as we can because we’ve proven that over the last few years we’re a top team. “Pre-season is no different. You’ve got to train so hard to be ready for the first game of the season, which for us comes against Arsenal in the Community Shield. “We’ve got to be right at it come that first game and we’ve got another chance to win silverware. “After that, the Premier League starts pretty quick after that as well, so you need to be ready.”

For Arsenal, the curtain-raiser to the new season offers Gunners boss Mikel Arteta an opportunity to gauge his side’s progress heading into his first full campaign in charge. The Spaniard’s impressive work after arriving from Manchester City in December culminated in FA Cup glory against Chelsea, a success keyed by Arteta’s astute tactics and Pierre-Emerick Aubameyang’s brace. Since that memorable victory, Aubameyang has kept Arsenal waiting as they try to persuade him to extend a contract that expires at the end of this season. Arteta is confident Arsenal’s captain will commit his long-term future to the club, while Mesut Ozil and Matteo Guendouzi could be brought back from exile after being banished towards the end of last season.

Ozil and Guendouzi were frozen out over Arteta’s concerns about their commitment and attitude respectively. “I have been really clear that everybody starts from zero,” Arteta said. “All the time in football, what you did two weeks ago or two years ago doesn’t matter. It is what you are able to contribute to the team now so everybody is going to have the same opportunities. “They have to show with their performance and attitude that they are better than their team-mates or they are somehow contributing to what we want to achieve this season.”