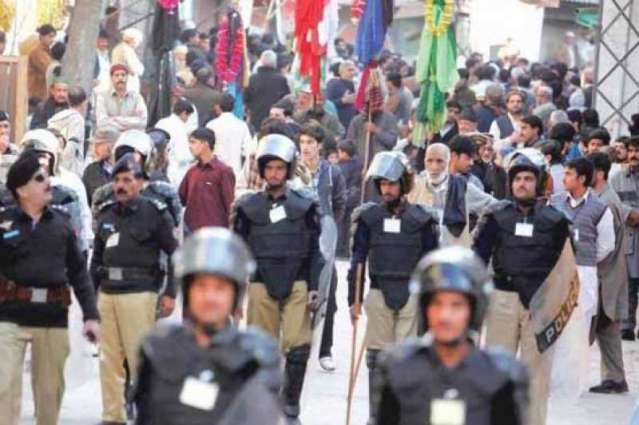 According to the diversion plan devised by SSP (Traffic) Farrukh Rasheed following directions of IGP Islamabad Muhammad Aamir Zulfiqar, a total of 458 cops including one SP, two DSPs,15 Inspectors would perform duties on the occasion to divert traffic on alternate routes. The SSP (Traffic) Farrukh Rasheed would himself supervise the entire plan while traffic police officials would be present at diversion points to guide road users.

ITP FM Radio 92.4 would also inform people about the latest situation on the road through special transmission.

The main mourning procession would be taken out from Imam Bargah Asna-e-Ashri G-6/2 on 9th Moharram-ul-Haram, which will culminate at same place after passing through its traditional routes.

During the procession, Fazle Haq road, roads from Poly Clinic to Kalsoom plaza will remain close. According to plan the 7thAvenue from F-6 Chowk to Soharwardi road, Fazal-e-Haq Road from China Chowk to Kalsum Plaza will be closed for general traffic.

The road from Iqbal Hall to Melody Chowk, Municipal Road from Markazi Jamia Masjid to Poly Clinic Chowk, Luqman e Hakeem Road from Poly Clinic to Lal Quarter while G-6 service road from G-6/2 Chowk to Lal Quarter Chowk will remain close for general traffic from 8 am to onward (till end of procession). 8 pm. Traffic will be diverted alternate routes. The citizens may use one way of 7th Avenue for Kulsoom Plaza to Chand Tara Chowk and Jinnah Avenue from Kulsoom Plaza to China Chowk. The other roads including 7th Avenue, Aabpara, Sehrwardy Road, Shaheed Milat road may be used as alternate routes.

Another procession on 9th Muharram will start from Imambargah Musa Kazim in sector I-10/1 which will culminate there after passing through various routes.

The various roads including I-10 Markaz, CDA Chowk #1, Katarian bridge, IJP Road (Pirwdhai and Faizabad area) will remain close for traffic while citizens are asked to use IJP road if they want to go to I-10 (Sabzi Mandi) from Faizabad, Murree road, Bhara Kau or Khana bridge. The residents of sectors I-8, I-9 would use external IJP, Pirwadhai road.

SSP (Traffic) Farrukh Rasheed has appealed the citizens to use alternate routes and ITP personnel will be deployed on various points to guide them. The citizens have been requested to cooperate with police.