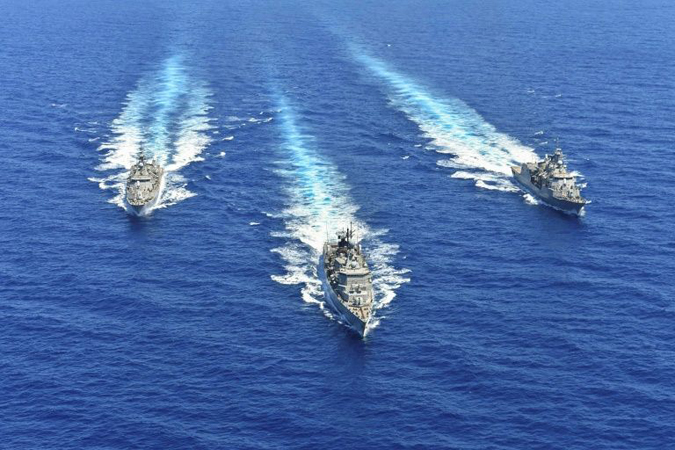 Greece and its EU allies held war games in the Mediterranean Wednesday while Turkey conducted drills with the US navy nearby, as the row between the two neighbours over gas and maritime borders ratcheted up another notch.

The convergence of a growing number of warships on an energy-rich but disputed patch of sea between Cyprus and Crete came as NATO and a host of European officials called for cooler heads to prevail.

Greece and Turkey are ancient rivals with a litany of disputes — despite both being members of the NATO military alliance.

They nearly went to war over some uninhabited islets in 1996, and earlier this months frigates from the two sides collided while Turkey was searching for energy in the eastern Mediterranean.

The threat of another conflict could imperil Europe’s access to a wealth of new energy resources and draw in nations such as Egypt and war-torn Libya.

NATO Secretary General Jens Stoltenberg said he was “personally regularly in contact with Ankara and Athens”.

After failed shuttle diplomacy aimed at getting the two sides talking again Tuesday, Berlin on Wednesday criticised the naval exercises as “not helpful”.

The emerging crisis is quickly rising to the top of the agenda not only regionally but also in Brussels and Washington.

Greek Prime Minister Kyriakos Mitsotakis said after telephone talks with US President Donald Trump that Athens was “ready for a significant de-escalation — but on condition that Turkey immediately stops its provocative actions”.

But Turkish President Recep Tayyip Erdogan insisted Wednesday that Ankara would not accept preconditions such as suspending its gas exploration before resuming dialogue.

Turkey will “make no concessions on that which is ours,” Erdogan said.

Greece was able to secure the support of EU military powerhouse France in three days of war games starting Wednesday that also include Italy and Cyprus.

The Turkish defence ministry conducted its own drills with an Italian navy vessel on Tuesday.

And the same US destroyer that took part in the exercises with Turkey had staged air and sea manoeuvres with the Greek navy south of Crete on Monday. The seeming shifts in allegiance highlight Rome and Washington’s desire to avoid challenging Erdogan because of Turkey’s importance to conflicts in Libya and the Middle East.