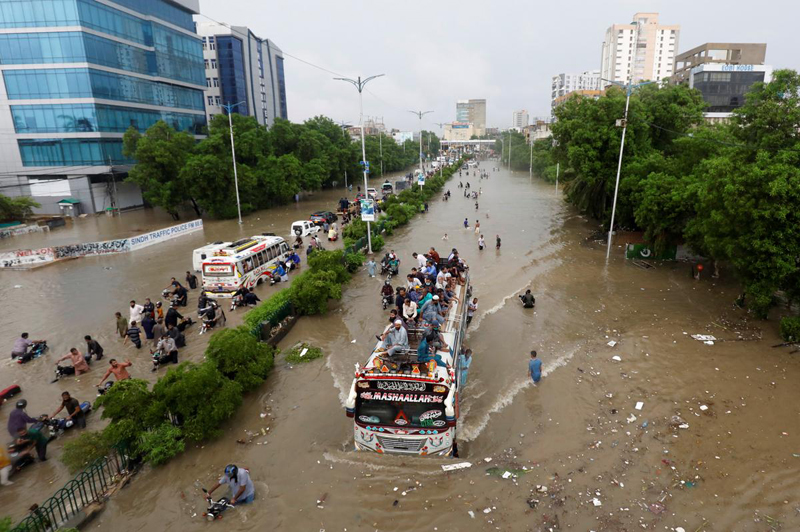 Thursday marked the third day of heavy rain this week, during which at least 19 people have died, according to media, while residents have been forced to abandon their homes. At least 19 people were killed in various rain-related incidents in Karachi on Thursday, officials and rescue services said, taking the tally of deaths during the three-day monsoon spell in the city to 30.

Some 484mm (19 inches) of rain has fallen this month so far, 130mm on Thursday alone, city weatherman Sardar Sarfaraz told Reuters. “It has never rained so much in the month of August, according to our data,” Sarfaraz said, adding that the data went back to 1931.

The crisis-like situation led Sindh Chief Minister Murad Ali Shah to announce a public holiday for Friday (today). A statement issued by his office said all government, semi-government and private institutions except essential services will remain closed on Friday.

The water level in Hub Dam, which supplies drinking water to Karachi and meets the water needs of several areas in Balochistan, crossed the 339-foot mark on Thursday and filled to its maximum capacity for the first time in 13 years. The water level in the dam has risen due to the recent spell of torrential rains in Karachi and Sindh and has now begun to flow out from the spillways into the sea near Mubarak Village.

In a statement, the military’s media wing said many areas were inundated and people stranded due to heavy rains in various parts of Sindh. An Army Flood Emergency Control Centre has been established in Karachi for assisting flood victims while a medical camp has been set up at the district centre of Gulberg, Liaqatabad and New Karachi for providing necessary medical care, the Inter-Services Public Relations said. It said the dewatering of more than 36 sites in Karachi had been completed while cooked meals covering 10,000 people had been distributed among flood victims in various areas.

Meanwhile, army engineers completed the enhancement of the bund along M9 near the Northern Bypass to avoid flooding. Army troops also filled a breach in the Malir River near Quaidabad, according to the ISPR. “Pakistan Army engineer boats are busy in shifting people to safer places,” the statement said.

A relief and medical camp has also been established in Latifabad area of Hyderabad. Food was provided to the affected population while army engineers were busy in dewatering various areas, it added. According to the ISPR, army troops “have been forwardly placed at Dadu for any eventuality and spillover at Nai Gaj Dam”. The banks of Puran Nullah in tehsil Jhudo of Mirpurkhas district had been damaged due to heavy rains, as a result of which water entered the nearest five villages. However, the breach was plugged with the combined efforts of army troops and civil administration to stop the flow of water to these areas, the ISPR said.

Amid urban flooding in the port city, a 30-year-old man was electrocuted to death in Landhi area, Edhi services said. His body was shifted to a nearby hospital. The Pakistan Navy during its rescue operation recovered the bodies of two persons from Shah Faisal Town and Korangi Crossing areas, which were handed over to their relatives.

According to a statement issued by the navy, it deployed emergency response teams in aid of the civil administration in various areas that were equipped with boats and other life-saving equipment. During the operation, the navy teams also rescued 55 people trapped in the flooded areas of Malir and Korangi Crossing, while 20 families stranded in Sammoo Goth were also evacuated to a safe location.

Many major arteries witnessed severe traffic jams across the city and many areas of Karachi were experiencing power outages. Some areas of the city have been without power for more than 10 hours now. Urban flooding led to the closure of the KPT underpass in Clifton as well as the Punjab Colony, Liaquatabad, Nazimabad and Ghareebabad underpasses for traffic, according to the Traffic Police. The situation caused traffic jams on surrounding roads. According to the Met Office, the city will continue to receive rain until Thursday night.

Power was suspended in several areas as a precautionary measure, the Karachi Electric’s spokesperson said. Noting that there was “heavy rain and severe flooding” across Karachi, the KE, in a tweet, said: “Power shutdown in effect for public safety as streets, houses and buildings flooded. In this crisis please be prepared for prolonged shutdowns as power restoration is dependent on water receding.”