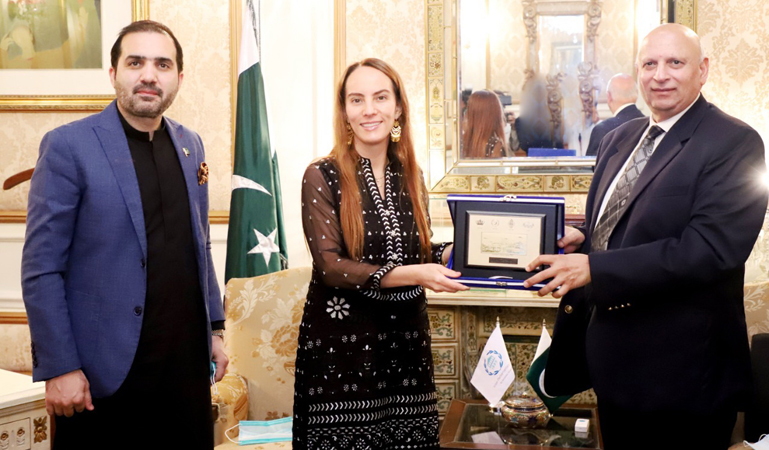 Matters regarding Kashmir dispute, inter-parliamentary cooperation, regional peace and security were discussed among others. According to details, President of the Inter-Parliamentary Union, Gabriela Cuevas Barron called on Governor Punjab Chaudhry Mohammad Sarwar in Governor House.

Senator Mirza Afridi and Principal Secretary to Governor Punjab Dr Rashid Mansoor were also present on this occasion. Governor Punjab apprised Ms Gabriela about Punjab Government’s steps to curtail the spread of Coronavirus, to provide relief to the distressed families affected by COVID19, and to ensure the provision of safety equipment to the healthcare workers in the province.

Governor Chaudhry Sarwar also apprised her about the ration distribution campaign that was run with the help of NGOs to provide relief to the deserving families across Punjab. President of the Inter-Parliamentary Union, Gabriela Cuevas Barron appreciated Government’s smart lockdown policy and the relief activities during Coronavirus Pandemic. Governor Punjab Chaudhry Mohammad Sarwar said that Pakistan supports peace. The sacrifices of our security forces as well as the public to root out terrorism and to maintain law and order in the region are unmatchable, he added. Highlighting Indian atrocities, Governor Punjab said that India has been inflicting the worst atrocities on the Muslims living in Indian Illegally Occupied Jammu & Kashmir (IIOJK) and India. India has been orchestrating genocide in IIOJK by blatantly violating the Human Rights conventions.

Governor Punjab Chaudhry Mohammad Sarwar urged the International Peace organisations to take action against worsening Human Rights crisis in India and Kashmir. He said that resolving Kashmir dispute as per the conventions of the United Nations is compulsory for maintaining regional peace and security. Governor Punjab said that Parliamentary Diplomacy has a huge role in promoting social prosperity, progress and development. PTI government under the leadership of Prime Minister Imran Khan is taking practical steps for strengthening of all institutions including the Parliament, he said. President of the Inter-Parliamentary Union, Gabriela Cuevas Barron said that the world’s problems can only be dealt with mutual cooperation and strategies.

She said that institutionalised support and mutual cooperation are very important for solving the problems that the world is facing today. She said that all countries of the world will have to be united in the fight against Coronavirus.