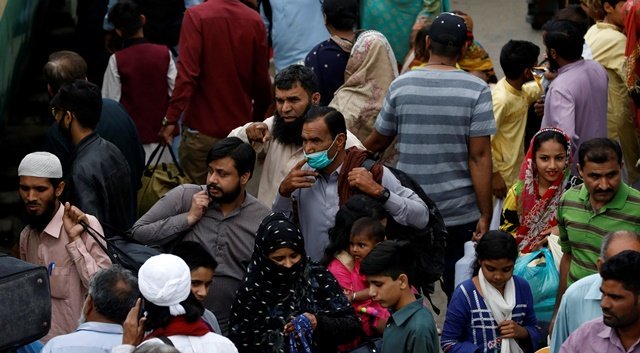 ISLAMABAD: Despite ending its lockdown earlier, while Pakistan managed to flatten the Covid-19 curve, many international organisations and publications had expressed concerns over sharp increasing virus cases in India due to feeble strategy of the Modi’s government.

It added that six months after registering its first case, active cases in Pakistan are continuing to steadily decline, with the number of deaths recorded in a day often down to single digits.

Several factors – including the phased implementation of lockdowns, effective hospital case management and treatment protocols and demographic and cultural factors – may have interacted to help achieve the outcome, Pakistani doctors and epidemiologists told the Qatar-based news channel.

“The tougher question is why, and the answer to this is the million-dollar question. We are not seeing that huge explosion that we had anticipated,” says Dr Faisal Mahmood, head of infectious diseases at Aga Khan University Hospital.

“The data was coming in, they were being collated and there were numerous agencies, with army and civilians both, working on keeping the cases low,” he says.

“The government of Pakistan reopened the economy in phases and in doing so achieved the impossible by flattening the curve,” hailing Pakistan’s move against the virus in its report The Diplomat – the premier international current-affairs magazine for the Asia-Pacific region claimed.

It further reported, in May, Pakistan appeared to be on the edge of a devastating Covid-19 outbreak. The government defied all norms by deciding to lift its lockdown at a time when the country was recording a daily average of over 5,000 cases, with local transmission accounting for at least 90 percent of the spread.

By mid-August, the global Covid tally crossed 23 million, with over 810,000 deaths. Pakistan’s numbers remained relatively low, at around 292,000 infections and over 6,200 deaths in a population of 220.4 million. While the world recorded more than 4 million infections and over 200,000 deaths in the past three weeks, Pakistan contributed around 12,000 cases and less than 250 deaths to that tally, it added.

Contrary to this situation as of August 18, India has officially recorded more than 2.7 million cases of Covid-19, putting it third in the world behind the US and Brazil.

“But India is on track to overtake them both. I fully expect that at some point, unless things really change course, India will have more cases than any other place in the world,” Time magazine reported while quoting Dr Ashish Jha, director of Harvard’s Global Health Institute, who further added with a population of 1.3 billion, “there is a lot of room for exponential growth”.

The magazine reported that the pandemic has already reshaped India beyond imagination. Its economy, which was faltering even before the lockdown, the International Monetary Fund (IMF) now predicts it will shrink by 4.5% this year. Many of the hundreds of millions of people lifted out of extreme poverty by decades of growth are now at risk in more ways than one.

It claimed that a large numbers had left their villages in recent years for new opportunities in India’s metropolises. But many have been left destitute by the lockdown. Gaps in India’s welfare system meant millions of internal migrant workers couldn’t get government welfare payments or food. Hundreds died, and many more burnt through the meagre savings they had built up over years of work.

As the virus shows no sign of slowing, economists are worried about how India can recover — and what happens to the poorest in the meantime. “The best-case scenario is two years of very deep economic decline,” says Jayati Ghosh, chair of the Centre for Economic Studies and Planning at Jawaharlal Nehru University in Delhi. “There are at least 100 million people just above the poverty line. All of them will fall below it,” the magazine anticipated.

The wide-scale economic disruption caused by the lockdown has disproportionately affected women in India. Because 95% of employed women work in India’s informal economy, many lost their jobs, even as the burden remained on them to take care of household responsibilities. Many signed up for India’s rural employment scheme, which guarantees a set number of hours of unskilled manual labour. Others sold jewellery or took on debts to pay for meals.

“The Covid situation multiplied the burden on women both as economic earners and as caregivers,” Time said quoting Ravi Verma of the Delhi-based International Centre for Research on Women. “They are the frontline defenders of the family.”

Showing different picture from India, The Diplomat when asked to comment on reason behind Pakistan’s early success in fight against Corona, federal minister for Planning, Development and Special Initiatives Asad Umar explained, “Media played an important role in creating awareness, which was backed by our testing, contact tracing, and quarantine program. We managed to increase testing capacity in a very short period and applied a sophisticated tracking system that ran through the ground to apex level.”

Asad Umar, who also manages Corona related affairs from National Command and Operation Centre (NCOC), said: “There is a universal acknowledgments that the virus’ spread can be slowed down through behavioural change in the society. It can be voluntary with the masses informed of the risk and how to save themselves or it can be administratively enforced. We chose to do both.”

“For the first three months, we saw a significant change in behaviour. People wore masks and maintained social distancing. Once the cases slowed down, we saw less adherence to the SOPs. This was followed by Eidul Azha celebrations, which also fuelled local tourism with thousands driving to the mountains during the holidays.”

International health experts observed that while some countries, such as Pakistan, China and Germany have managed to bring down the number of infections, others like the United States, India, and Brazil are still facing hurdles in controlling the spread of virus.

Even more astonishingly, Pakistan is the only country that managed to reverse a projected economic downturn as the International Monetary Fund had revised its projection which was much better then what it projected in April for Pakistan. This is all thanks to rational and timely policy decisions, economists claimed.

He also said, “Our daily testing capacity increased from 472 tests in February to over 60,000 tests, and the number of labs increased from four to 133. As many as 2.36 million tests have been conducted so far, and currently we are maintaining an average of 22,000 tests per day while 89 per cent of our reserved ventilators have been vacant and Pakistan has highest percentage of recoveries in the region at 93.8 per cent.”

“We are happy as when Indian citizens are facing strict lockdown, people in Pakistan are celebrating events on easing of the lockdown like Eid ul Fitr, Eidul Azha and Independence Day.”