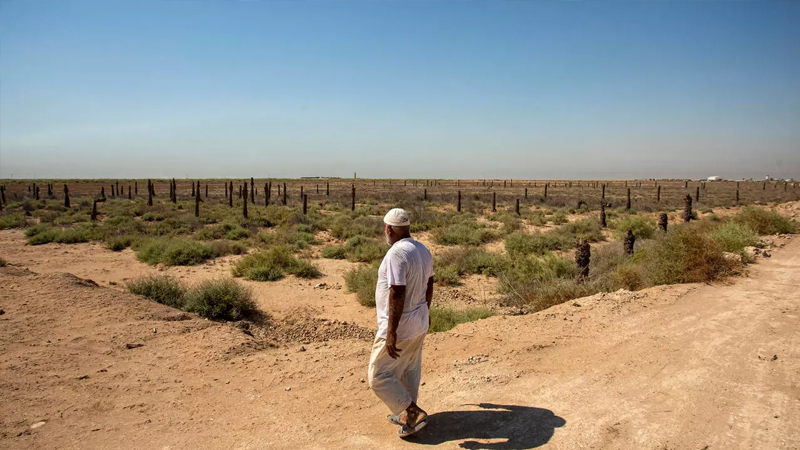 Nowhere is the effect on the country more palpable than in Basra, Iraq’s only coastal province.

Here, the Tigris and Euphrates — on which millions of Iraqis rely to farm — meet at the Shatt al-Arab waterway before spilling into the Gulf.

But with flows already heavily weakened, seawater is pushing back into the freshwater rivers, strangling wildlife and human settlements that have survived on these banks for millennia.

“Salinity has gone up in recent years and it’s killing the farmlands,” said Abu Shaker, a 70-year-old who has spent decades growing Iraq’s famed date palms.

Now, with such little fresh water, Abu Shaker and fellow farmers have left their ancient palms withering on cracked and salty earth, moving north in search of potable water.

“Before, we could sell our dates in the Gulf and as far as the United States,” he said.

“Now, you can see with your own eyes. This whole river died.”

Iraq’s water woes aren’t new. But with increasing regional desertification and population growth, Turkey and Iran are keener than ever to keep precious water resources for themselves.

Their new dams on the Tigris and Euphrates, and the tributaries that feed them, have reduced water flows into Iraq by half, said Baghdad’s Water Minister Mehdi al-Hamdani.

But he remains hopeful, with plans in the works to improve access across the country and guarantee drinking water to all, even in a worst-case scenario.

Hamdani, who headed Iraq’s dams directorate before becoming minister, said there were plans to build a large reservoir in Makhoul, north of Baghdad.

“It would allow us to store more water, generate electricity and protect Baghdad in case of floods,” he said.

It would be one of the biggest infrastructure projects in Iraq since 2003, when a US-led force toppled dictator Saddam Hussein and unleashed years of conflict.

Since then, government plans to rehabilitate dilapidated power grids, water networks and roads have been regularly derailed by warfare, most recently the years-long fight against the Islamic State group, which Iraq declared defeated in late 2017.

A health crisis sparked by a shortage of safe drinking water hospitalised some 100,000 people in Basra in 2018.

Sustainable access, they say, will only be secured through water-sharing deals with Ankara and Tehran.

Talks with Turkey, which have focused on the enormous Ilisu dam on the Tigris, were suspended for two years but resumed in May, when Iraq’s new cabinet came into power.

Hamdani vowed that an ongoing air and ground assault by Ankara on Kurdish militants in northern Iraq would not derail the “positive” talks, which included a deal to regulate filling the Ilisu.

In some parts, flows are at a meagre “two cubic metres per second — that is to say, an almost total interruption.”

Hamdani was again optimistic, however, saying comprehensive negotiations with Tehran were proceeding smoothly.