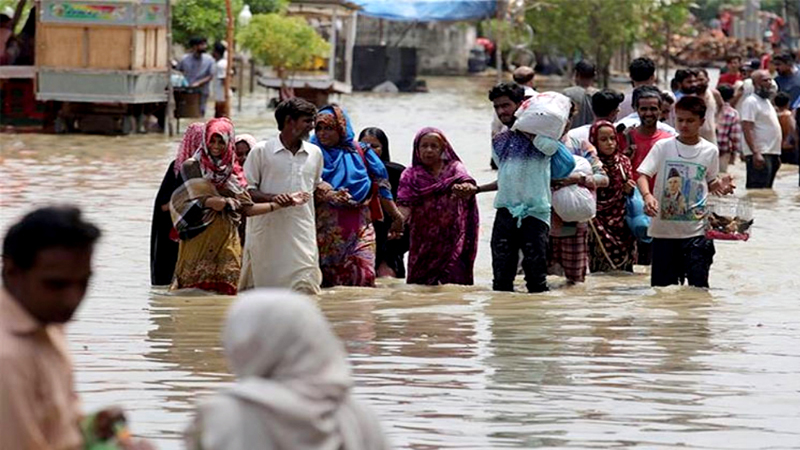 The military said Wednesday it will deploy rescue helicopters to Karachi to transport some 200 families to safety after canal waters flooded the city amid monsoon rains, displacing scores of people, officials said Wednesday.

Rescuers could not use boats to reach the marooned families because of fast-moving floodwaters in the city’s low-lying neighborhoods and the military said helicopters would fly when the weather was clear.

There were no immediate reports of casualties Wednesday, but 90 people have died in rain-related incidents across Pakistan since Sunday, the country’s national disaster management agency said. Video footage showed parts of the city under water as troops tried to repair an embankment of a canal. Water started pouring out of the canal Tuesday amid heavy rains, inundating nearby areas.

On Wednesday, some families displaced by the rain said the muddy water was waist-deep when they left houses carrying small bags with essential items. Although volunteers and troops were able to reach several rain-hit areas with food, people in affected areas complained they were still waiting for help.

According to the Inter-Services Public Relations (ISPR), “Army Engineers’ machinery including heavy plant effort is in progress to stop water flow from Malir Nadi by refilling the breached area.” The ISPR added that more than 200 families have been stranded on rooftops due to heavy flooding in Malir Nadi, Kohi Goth and Dur Muhammad Goth. “Cooked meal being provided to affected population struck due to heavy rains. Due to heavy water current at the moment, Army helicopters will be flown to rescue these families after weather clearance,” it added.

Power breakdowns were also reported in many areas of the city, with almost 90% of the metropolis experiencing power outages as rains lashed the city. Electricity supply remained suspended in Surjani Town, Gulistan-e-Jauhar, Gulshan-e-Iqbal, North Karachi, various areas of District Central, old city areas, vast areas of district Malir, Korangi, Landhi, Keamari and adjoining areas for several hours. The K-Electric said its teams were working to restore power while in many areas, electricity supply had already been restored.

Edhi Foundation chief Faisal Edhi and Pakistan Tehreek-i-Insaf (PTI) MPA Raja Azhar on Wednesday survived drowning after their boat capsized during a rescue operation near Korangi Causeway in Karachi. They were on a rescue mission to find people who had drowned near Korangi Causeway and went ahead towards Do Darya area during the operation. According to Edhi officials, the boat overturned due to rough waves and they were fortunately rescued by some passing-by fishermen. They were shifted to Ibrahim Hyderi jetty for medical treatment.

Later talking to media, Faisal Edhi said that he was trying to rescue eight people who had drowned in Malir river when the incident occurred. “After a search operation, we decided to return from sea view area when suddenly the engine of the boat encountered technical issues. Our boat capsized due to rough waves in the sea,” he said, adding that there were six people on board at the time of the incident including PTI MPA Raja Azhar. He said that they were wearing life jackets which saved them from drowning as they spent almost half an hour in the open sea, facing rough waves.