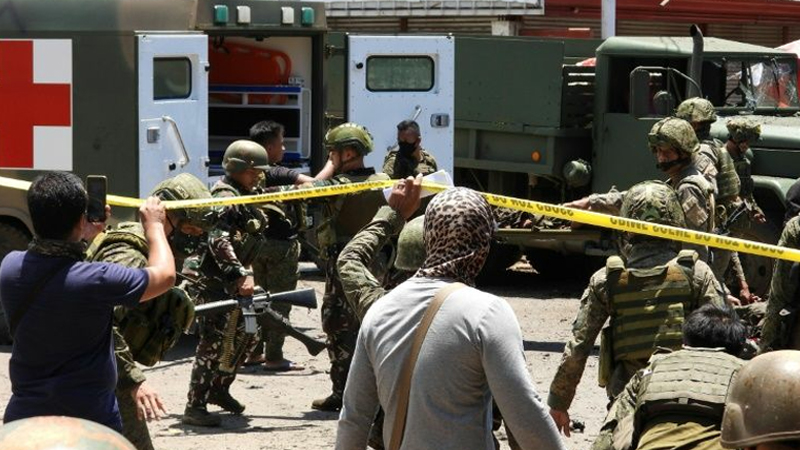 Two female suicide attackers who carried out a double bombing in the southern Philippines were the widows of militants who had worked for the Islamic State-linked Abu Sayyaf group, the army chief said Wednesday.

The pair blew themselves up in a coordinated attack on Jolo island in Muslim-majority Sulu province on Monday, killing or wounding scores of security forces and civilians in the country’s deadliest attack this year.

The death toll from the blasts has risen to 15 with 74 wounded, the Armed Forces of the Philippines (AFP) said in a statement, blaming Abu Sayyaf for the attack.

“The Abu Sayyaf Group will not deter us from nor shake our resolve to bring an end to their violence,” AFP Chief of Staff Lieutenant General Gilbert Gapay said.

“Our troops on the ground continue to be on high alert to deter similar attacks.” No group has claimed responsibility. Army chief Lieutenant General Cirilito Sobejana identified the female bombers as Inda Nay and Nanah. In a text message to reporters, Sobejana said Nanah was the wife of Norman Lasuca, who is considered the Philippines’ first homegrown suicide bomber.

Lasuca and another attacker blew themselves up outside a military camp on Jolo in June 2019, killing several soldiers and civilians.

Inda Nay was the wife of Talha Jumsah, also known as Abu Talha, who acted as liaison between Abu Sayyaf and the Islamic State group. He was killed in November in a shoot-out with security forces on Jolo.