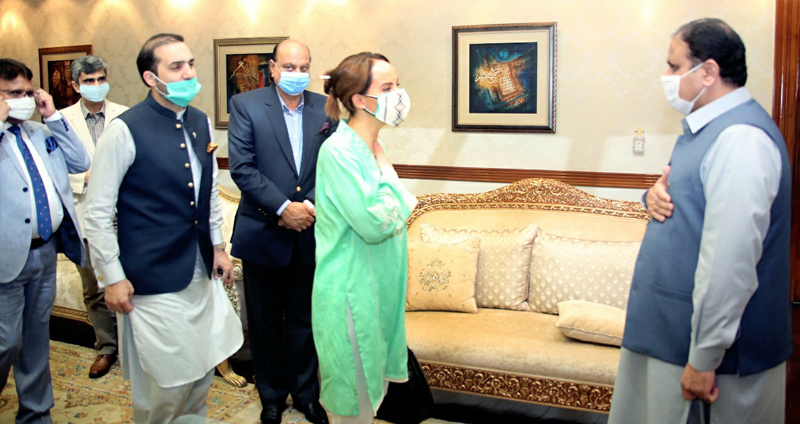 The CM extended felicitations to her for completing 130 years of the Inter-Parliamentary Union forum while Ms Gabriela Cuevas Barron appreciated the effective anti-corona strategy employed by the CM Punjab. Usman Buzdar also commended the services rendered by IPU President for the supremacy of the institution of the parliament. Pakistan fully believes in the supremacy of the parliament for strengthening democracy and it also stresses the importance of dialogue for maintaining peace, development and solution of conflicts, added Usman Buzdar. The chief minister apprised that Punjab government has taken unprecedented steps for the welfare of the people. The government has planned a new city near Ravi River to overcome the city pollution and to raise the level of underground water. For this purpose, an autonomous body has been established, the CM further informed.

The chief minister pointed out that minorities enjoy unprecedented religious freedom and the budget has been sufficiently increased for their welfare. On the other side, the anti-corona strategy, steered by Prime Minister Imran Khan, has yielded positive results and government was successful in overcoming this virus in Punjab, the CM added. Meanwhile, steps have been taken to open educational institutions from the next month as line departments have played a commendable role in combating this hazard.

The CM further apprised that 13 special economic zones are being set up adding that work has started on two SEZs and the foundation stone of 3rd SEZ will be laid in Bahawalpur soon. The government has devised a plan to provide facilities to the people at their doorsteps and southern Punjab secretariat has also been set up. It enjoys administrative as well as financial autonomy, he said. Secretaries of different departments will perform their duties in southern Punjab secretariat and the people will not have to travel to Lahore for the solution of their problems. He regretted the past governments had not done anything in this regard but the incumbent PTI government has given due attention to the development of backward areas. The CM further stated that the Punjab government has made maximum legislation in the public interest and added that investors are provided best services under one window. Punjab will be made a hub of tourism and industry, the CM concluded.

The Punjab government is working for public welfare through the best policy and I am happy to visit Lahore. Consistency in contacts is necessary to promote the bilateral relations, observed the IPU President. The CM also hosted a luncheon in the honour of Ms Gabriela Cuevas Barron and other members of her delegation including member parliament of Mexican Congress Mr Jose Ignacio Sanches, Senator Mirza Muhammad Afridi and others. Provincial Ministers Raja Basharat, Dr Yasmin Rashid, Ijaz Alam and others were also present.

Chief Minister Punjab Sardar Usman Buzdar has alerted the line departments in the wake of possible flood in Chenab and Jhelum rivers and asked the administration of concerned districts to remain fully vigilant and ensure necessary measures in advance. He directed that ebb and flow of water in rivers be continuously monitored along with maintaining close liaison with relevant federal agencies. All preparations should be fully completed for dealing with any untoward situation, he said. Similarly, abundant stock of anti-venom vaccine and chlorination tablets should be maintained. The health department should make ready the first-aid teams along with ensuring advance arrangements for the vaccination of animals and the provision of fodder. The concerned commissioners and DCs should conduct visits to review the field situation, he said. Flood emergency control rooms should be functional round-the-clock and line departments should be fully prepared to deal with any possible challenge of floods. Paperwork would be tolerated, the CM warned.

Chief Minister Punjab Sardar Usman Buzdar chaired a meeting to provide better facilities in shelter homes. The committee led by ACS (U&I) presented its recommendations for bringing improvements in shelter homes and important decisions were made.

The CM accorded approval to establish ten new shelter homes in rented buildings in the provincial metropolis adding that identification of suitable places be done soon for setting up new shelter homes.