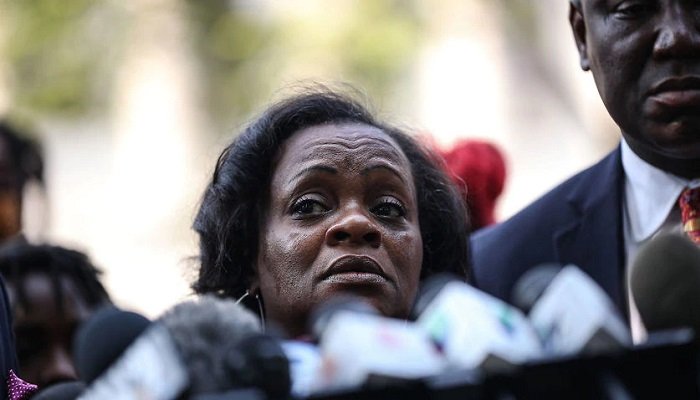 The mother of Jacob Black — whose son was shot seven times by police officers and paralysed as a result and sparked violent protests in US — urged for peace and calm on Tuesday, after doctors said it would “take a miracle” for her son to walk again.

“We really just need prayers,” Julia Jackson said of her son Jacob Blake, seen in video being shot up to seven times at point-blank range by a white Kenosha, Wisconsin police officer as he tried to get into his car with his three children inside on Sunday.

With hundreds of protesters marching for a third night Tuesday — and at least one small group of mainly white, heavily armed men vowing to protect property — her call for healing took on greater urgency.

Clashes between a smaller group of demonstrators and police broke out later Tuesday, with protesters shooting fireworks at law enforcement who responded with rubber bullets, one of which hit AFP’s reporter.

The most recent police shooting of an African American has sparked outrage and protests in US cities, including New York and Minneapolis.

The majority have demonstrated peacefully, though some protesters also burned cars and buildings on Sunday and Monday nights in Kenosha.

Jackson was visibly emotional as she urged peace ahead of a national protest planned for Washington this weekend, where Blake’s shooting, the killing of George Floyd three months ago and other deaths have mobilized the powerful Black Lives Matter movement.

The damage caused on previous nights “doesn’t reflect my son or my family,” she said.

Then she issued a powerful call for unity and denunciation of racism in America.

“Clearly you can see by now that I have beautiful brown skin. But take a look at your hand. And whatever shade it is, it is beautiful as well,” she said.

Lawyers for the family said one of the policeman’s bullets shattered Blake’s spine, and others damaged his stomach, colon, liver and arm.

“It is going to take a miracle for Jacob Blake Jr to ever walk again, he said.”

‘Attempted murder’
Blake’s mother said she was praying for the police. But his father, Jacob Sr, accused law enforcement — who remain quiet about the incident — of “senseless attempted murder.”

“They shot my son seven times, like he didn’t matter,” Blake said, struggling to hold back tears. “But my son matters. He’s a human being.”

Blake, 29, was shot after trying to break up a domestic dispute, according to Crump.

A bystander video shows a police officer shooting seven times at Blake while tugging on his shirt as he tried to get into the car.

The children, Crump predicted, would have “psychological problems for the rest of their life.”

One, aged eight, had been celebrating his birthday, Crump continued, adding: “Can you imagine what… (he) is going to think about every time he has a birthday?”

Officials say police had been called to a domestic disturbance but have not said why the two officers had their guns pulled.

Crump, who represents the families of Floyd and other black people unjustifiably shot and killed, demanded the two officers involved — currently suspended — be fired and charged.

“For black America, this is our reality,” he said.

He pointed to another shooting last week.

Police in Lafayette, Louisiana are being accused of excessive force after firing nearly a dozen rounds into Trayford Pellerin, 31, who was carrying a knife and walking towards a convenience store on August 21