Three days of rains kill 90, damage over 1,000 houses across Pakistan

* 31 deaths reported in Sindh, 23 in KP, 15 in Balochistan, eight in Punjab and 13 in AJK
* Sindh declares emergency as heavy rains wreak more havoc on Karachi 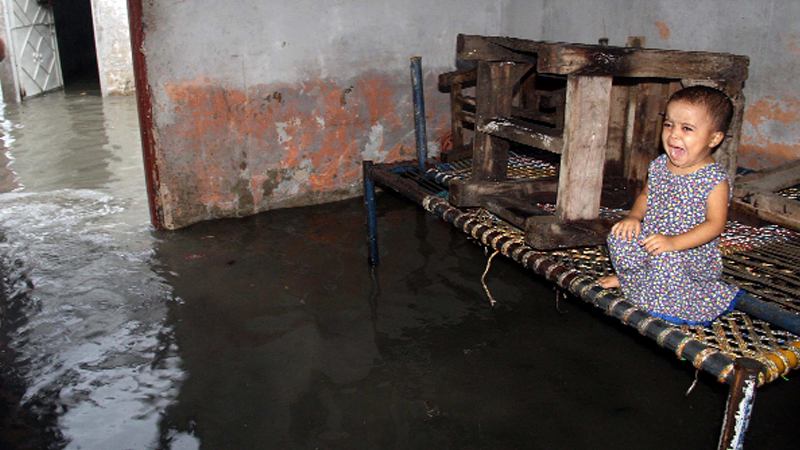 Three days of monsoon rains have killed at least 90 people and damaged 1,000 homes across Pakistan, the National Disaster Management Authority said Tuesday, as another spell of heavy rain lashed the port city of Karachi.

Heavy rains continued for the second day in Karachi on Tuesday, wreaking more havoc on the metropolis, flooding roads and causing a landslide. At least three children lost their lives in rain-related accidents.

Meanwhile, the Sindh chief minister, in view of the incessant rainfall, declared a rain emergency in the province, instructing the chief secretary to issue the notification in this regard. The leaves of all government employees have been revoked and they have been directed to report to their respective departments immediately.

Speaking to media persons on a visit to Share Faisal on Tuesday evening, Chief Minister Syed Murad Ali Shah said that all low-lying areas in the city have been inundated. “I have declared an emergency in view of the prevailing situation,” said Shah. “We stand with the people in this time of difficulty.”

According to data from the Met department, the highest amount of rainfall, 72 millimetres, was recorded at Gulshan-i-Hadeed while Nazimabad recorded 51.6mm, North Karachi 37mm, Surjani Town 25.6mm, Landhi 11.5mm, Pakistan Air Force (PAF) Base Faisal 11mm, Jinnah Terminal 9.6mm while University Road received 8.8mm of rainfall. Surjani Town and Orangi Town which had received heavy rainfall during the last spell were flooded once again as people started to evacuate from their homes while the Korangi causeway was also shut down due to flooding, a private TV channel reported.

Three children lost their lives in rain-related incidents during the day, according to Edhi rescuers and police. A 13-year-old boy drowned in a pond created by accumulated rainwater in Musharraf Colony, according to an Edhi rescue team. The body was later retrieved and taken to Murshid Hospital. Police officials said a 17-year-old boy died due to electric shock in the Haroonabad area. His body was shifted to the Dr Ruth Pfau Civil Hospital Karachi. Meanwhile, a 10-year-old boy was killed and his mother injured after a wall of their home collapsed during the rain.

A spokesperson for the K-Electric (KE) said electricity supply to certain areas of the city had been temporarily suspended for safety reasons. “Power supply in some areas was immediately suspended after light rain last night and it has also been suspended in some areas where the water level is high for safety reasons,” the spokesperson said. “Water has entered the electricity installations in Gulshan, Gulistan-i-Jauhar and Bin Qasim whereas water has also entered homes in low-lying areas of the city and restoring the supply of electricity in flooded areas can be dangerous. “K-Electric teams are in contact with the relevant organisations and teams are working [to restore power],” he added.

Torrential rains also lashed parts of Hyderabad, with the showers leaving drains across the city inundated. A few underpasses of the city were also overflowing with rainwater. Water entered many houses and caused difficulties for residents of the city. Many roads and streets in Hyderabad were left inundated.