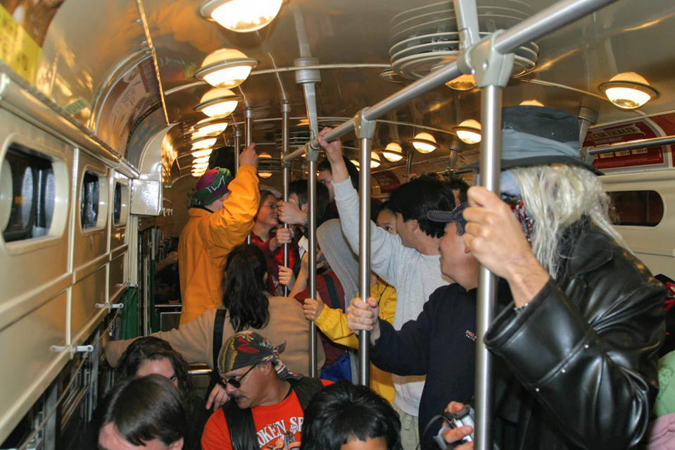 Temperature sensors, silent train cars, bleach-like odors – US city officials and transport experts are pulling out the stops to lure residents back on rails and buses after the coronavirus pandemic sent ridership plummeting.

As cities locked down to contain the spread of the deadly virus, urban transit systems have been devastated by millions of workers staying at home rather than commuting and by a sharp decline in tourism.

The dip in public transport use threatens urban liveability, said Hayley Richardson, a spokeswoman for TransitCenter, a New York-based non-profit that advocates for public transportation.

“The liveability of cities is really at stake here … Transit is the thing that makes cities possible,” she told the Thomson Reuters Foundation in a phone interview.

Ridership of buses and trains shrank by 75% in New York City and 90% in the San Francisco Bay Area in April, according to Transit, a mobile app that collects global transport data – although numbers have somewhat recovered as cities emerge from lockdowns.

Essential workers like nurses and grocery clerks have used public transit throughout the pandemic, but the key task is luring back riders, some of whom have opted for driving to the office and most of whom are working remotely, urban experts say.

About 180,000 Americans have died from COVID-19, according to a Reuters tally – a toll that experts warn will likely surge following recent record spikes in case numbers and an alarming rise in hospitalizations in many states.

Requiring all passengers to wear masks is an obvious first step, with successful experiences in Tokyo, Taipei, Seoul and Paris, said Richardson.

But achieving that shift is more difficult in the United States, where mask wearing has become a political issue and some people are adamantly opposed to the practice, she added. “I’m not going to lie. It’s going to be a challenge.”

The New Jersey transit system that carries commuters in and out of New York City has asked customers to “avoid loud talking and restrict phone conversations” in an effort to limit the potential range of droplets that might contain the coronavirus.

Boston’s transit system has made its schedule more flexible, Richardson said, adding services to accomodate health care workers in early morning hours and in locations where essential workers are riding.

The pandemic has forced cities and public agencies to cut through red tape and streamline bureaucratic processes, said Rachel Zack, director of policy at Remix, a San Francisco-based transit and urban planning company.

“Cities that used to have a four-month planning process now are doing it in a week,” she said.

Making a virtue of cleanliness is also critical, said Brianne Eby, senior policy analyst at the Eno Center for Transportation, a Washington-based think tank – although some experts question how much viral transmission occurs on surfaces.

“Agencies need to visibly clean vehicles and stations in front of people to reassure them,” she explained.

“Whether or not it’s effective, if it creates an incentive or reason for people to get back on transit, maybe it is worth it. But the challenge there is that it’s so costly to procure.”

Some agencies have looked for bleach with a strong smell because riders will register the scent as cleanliness, said Zack.

“People want to know that it’s clean, and they need some sort of signal,” she said. “It’s almost more of an art than a science at this point.”

New York and Boston, meanwhile, have rolled out apps that relay real-time information as to how many passengers are on incoming buses and trains, giving riders a choice of whether to hop on or wait for the next one.

“So if I’m nervous to try transit, but I see on this app that I can get a seat, I don’t have to touch any poles, I don’t have to get in anyone’s face, maybe that gives me the comfort that I need to choose transit instead of driving,” Richardson said.

“It only really helps workers who are flexible,” she added. “If you have to be at your job at 9am and you’ll get fired if you’re not, this doesn’t do much for you.”

Cities in other countries have tested similar solutions, with the Transport for London app showing riders which stations are crowded, when social distancing is most feasible and what cycling and walking alternatives exist.

Another idea is getting businesses to stagger their employees’ start times to prevent crowded rush hours, said Lisa Daglian, executive director of the Permanent Citizens Advisory Committee to the MTA, a group that advises New York City’s transit agency.

Transit systems will need major government funding, planners, researchers and officials say, given how much revenue has been lost in fares, tolls, and fuel and sales taxes.

The transit system serving the New York City metropolitan area alone is seeking more than $10 billion from Congress through next year.

“New York City without a transit system is like a skyscraper without an elevator,” said Philip Plotch, a transportation expert and associate professor of political science at Saint Peter’s University.

Getting people back on transit systems is reminiscent of the 1980s in New York when riders shunned the subways as dangerous, said Plotch.

“In the 1980s, there weren’t enough people on the system so you felt uncomfortable getting on a train that was empty or waiting on the platform. Here it’s the opposite. If there’s too many people, you feel uncomfortable.”

Transit systems must be candid with riders to survive, he added. “Transit systems have one shot to be credible, and if they’re not telling the truth, then they’re going to lose people.