How starving public health fueled a COVID fire in Florida 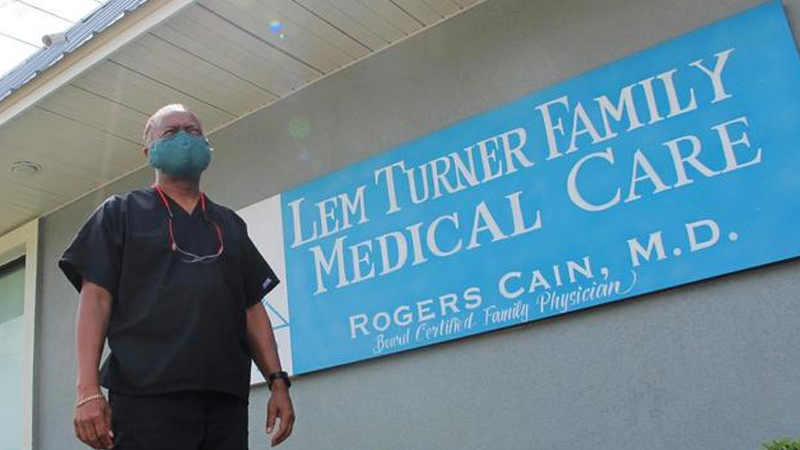 On a sweltering July morning, Rose Wilson struggled to breathe as she sat in her bed, the light from her computer illuminating her face and the oxygen tubes in her nose.

Wilson, a retiree who worked as a public health department nurse supervisor in Duval County for 35 years, had just been diagnosed with COVID-19-induced pneumonia. She had a telemedicine appointment with her doctor.

Staring back from her screen was Dr. Rogers Cain, who runs a tidy little family medical clinic a couple of blocks from the Trout River in north Jacksonville, a predominantly Black area where the coronavirus is running roughshod. Wilson, 81, was one of Cain´s patients who´d tested positive – he had seven other COVID patients that morning before noon. Three of her grown children had contracted the virus, too.

“It started as a drip, drip, drip in May,” said Cain, his voice muffled by his mask. “Now it´s more like a faucet running.”

Cain and Wilson are nervous. Over the past two decades, both watched as the county health department was gutted of money and people, hampering Duval´s ability to respond to outbreaks, including a small cluster of tuberculosis cases in 2012. And now they face the menace of COVID-19 in a city once slated to host this week´s Republican National Convention, in one of the states leading the latest U.S. surge.

Florida is both a microcosm and a cautionary tale for America. As the nation starved the public health system intended to protect communities against disease, staffing and funding fell faster and further in the Sunshine State, leaving it especially unprepared for the worst health crisis in a century.

Although Florida´s population grew by 2.4 million since 2010 to make it the nation´s third-most populous state, a joint investigation by KHN and The Associated Press has found, the state slashed its local health departments´ staffing – from 12,422 full-time equivalent workers to 9,125 in 2019, the latest data available.

According to an analysis of state data, the state-run local health departments spent 41% less per resident in 2019 than in 2010, dropping from $57 to $34 after adjusting for inflation. Departments nationwide have also cut spending, but by less than half as much – an average of 18%, according to data from the National Association of County and City Health Officials.

Even before the pandemic hit, that meant fewer investigators to track, trace and contain diseases such as hepatitis. It meant fewer public health nurses to teach people how to protect themselves from HIV/AIDS or the flu. When the wave of COVID-19 inundated Florida, the state was caught flat-footed when it mattered most, its main lines of defense eviscerated.

Now, confirmed cases have soared past 588,000 and deaths have risen to more than 10,000. Concerns over the virus prompted Republicans to cancel plans for an in-person convention in Jacksonville, opting for a pared-down version in North Carolina.

Health experts blame the funding cuts on the Great Recession and choices by a series of governors who wanted to move publicly funded state services to for-profit companies.

And when the pandemic took hold, they say, residents got mixed messages about prevention strategies like wearing masks from Republican Gov. Ron DeSantis and other political leaders. Voices within the health departments were muzzled.

“The reality, unfortunately, is people are going to die because of the irresponsibility of the decisions being made by the people crafting the budgets,” said Ron Bialek, president of the Public Health Foundation, a nonprofit in Washington, D.C., offering tools and training. “Public health can´t help us get out of this situation without our elected officials giving us the resources.”

State officials neither answered specific, repeated questions from The Associated Press and KHN about changes in public health funding, nor made staffers available for deeper explanations.

Dr. Leslie Beitsch, a former deputy secretary of Florida´s state health department, said failing to prepare for a foreseeable disaster “is governmental malpractice.” The nation´s pandemic response is only as good as the weakest link, he said. Since the virus respects no borders, other states feel the ripples of Florida´s failings.

Those failings are clear in Duval County, which had employed the equivalent of 852 full-time workers and spent $91 per person in 2008 but in 2019 had only 422 workers and spent just $34 per resident, according to the KHN/AP analysis of state data. That´s less than the typical list price of a single COVID test. Former county health director Dr. Jeff Goldhagen said the county´s team has been “dismantled to the extent that it could not really manage an outbreak.”

Cain´s private north Jacksonville medical clinic alone has had about 60 confirmed COVID cases and eight deaths. “We are all on fire right now,” he said. “You have to have a fire department that is adequately equipped to put out the fire. ”

Florida faced similar shortcomings around the time of the last great pandemic, the 1918 flu. Back then, according to a 1924 state report, public health workers faced too many demands and their efforts were “to some extent scattered and transitory.” The state could have used at least three more district health officers, the report said: “It is a source of regret and a matter of grave concern to public health workers that the funds available are not sufficient.”

The 1990s saw a move toward privatization, particularly as Medicaid managed care took hold, said a 2004 paper in the Florida Public Health Review. Still, per-person spending on local public health rose until the late 1990s, when adjusted for inflation to 2019 dollars, peaking at $59.

Wilson, the retired public health nurse stricken with COVID-19, recalled how Duval County´s department started feeling the financial pain during former Republican Gov. Jeb Bush´s administration in the early 2000s and kept losing nurses and other staff until they were “very, very short.”

Beitsch, who worked for the state health department in the 1990s, said the downward trend continued under former Republican governors Charlie Crist and Rick Scott, fueled by a growing belief in shrinking government that flourished in many states. Florida´s leaders exerted more control over public health, Beitsch said, and “the amount of local autonomy has been diminishing with successive administrations.”

The recession that began in late 2007 sparked public health reductions across the nation that were especially harsh in Florida. By 2011, budget cuts and lack of money were the most frequently cited challenges in a Florida public health workforce survey, which pointed to growing needs. In the following years, the state had some of the nation´s highest rates of heart disease and diabetes.

Squeezed departments struggled and sometimes stumbled. A report from the state health department´s inspector general for the 2018-19 fiscal year, for example, found a series of lost and inconsistent shipments of lab specimens from county health departments to the state lab – not long before the pandemic would make labs more important than ever.

As governor, Scott presided over the state from 2011 to 2019, when funding and staffing dropped most. Now a U.S. senator, he said through a spokesperson that he was unapologetic for health department cuts, which he characterized as a move toward “making government more efficient” without endangering public health.

“I´m sure that he had no problem with the cuts that were being made,” said Patrick Bernet, an associate professor in health administration at Florida Atlantic University. “To put it all on him is not fair because a bunch of little henchmen from the counties had to vote that way. … We keep voting in people who undervalue public health.”

Democratic state Sen. Janet Cruz, a legislator who has represented the Tampa region for a dozen years and sat on health care committees, said she watched lawmakers systematically cut money for health departments. When she questioned it, she said, some colleagues claimed the need wasn´t as great because the state was moving toward private family health care centers. “Public health in Florida has been wholly underfunded,” she said.

Some places have suffered more than others. Departments serving at least half a million residents spent $29 per person in 2019 on average, compared with $90 per person in departments serving 50,000 or fewer – a difference starker than the typical gap between larger and smaller departments nationally, according to an KHN-AP analysis. Experts can´t say exactly why the gap is wider in Florida, which has a state-run system, but point to politics and historical decisions about budgets.

Duval County´s health department spending was the equivalent of $34 per person, down 63% since 2008. Typically, about 22 workers, or 5% of the total staff, have been dedicated to preparing for and tracking disease outbreaks.

But when the pandemic hit, many there and elsewhere were diverted to fight the coronavirus, leaving little time for their typical duties such as mosquito abatement and tracking sexually transmitted infections such as syphilis.

“Current events demonstrate how bad a decision” the deep cuts to public health were, said Dr. Marissa Levine, a professor of public health and family medicine at the University of South Florida. “It´s really come back to haunt us.”

The pandemic caught fire in Florida this summer as the state´s rapid reopening allowed people to flock to beaches, Disney World, movie theaters and bars.

The state has had more than half a million confirmed cases – among them, players and workers for baseball´s Miami Marlins – and 35,000 hospitalizations, yet DeSantis still hasn´t issued a mask mandate. Some local governments have. Jacksonville adopted one in late June, and about a week later Republican Mayor Lenny Curry announced he and his family were self-quarantining because he´d been exposed to someone who tested positive for the virus.

Chad Neilsen, director of infection prevention at University of Florida-Jacksonville, lauded the mayor for the mask requirement, saying, “We know that masking works.” But he pointed out that other counties have different rules and that the inconsistent messaging breeds confusion.