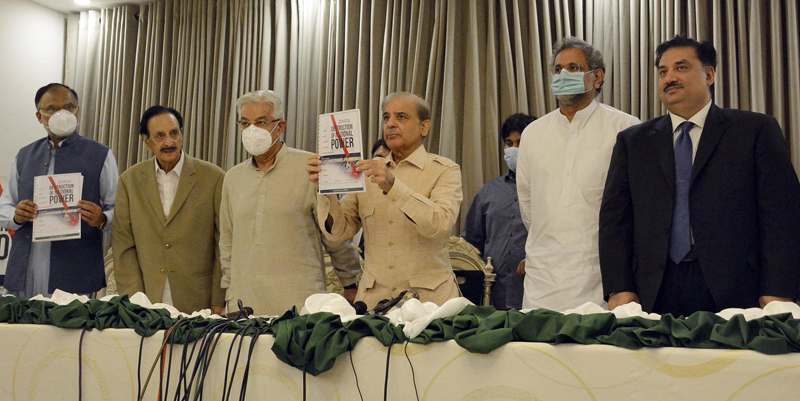 The Pakistan Muslim League-Nawaz (PML-N) on Monday accused the government of having ruined the country’s economy through its incompetence and pro-elite policies, saying the ruling PTI had promised a new Pakistan but the people today are yearning for the ‘old Pakistan’.

“They do not know even the basics of governance nor they care for the people’s issues,” PML-N President and Opposition Leader in National Assembly Shehbaz Sharif said while lashing out at Prime Minister Imran Khan’s government. “When we talk about the tabdeeli sarkar (regime of change), we don’t find anything to acknowledge but sadness and pain in the past two years,” he said, as his party presented a white paper titled ‘Destruction of National Power’ on the government’s two-year rule. “The inflation caused due to the government’s policies has brought the common man to the brink of destruction,” he said, and claimed the PML-N during its tenure under Nawaz Sharif’s leadership carried out ‘historic development’ and completed projects at a fast pace that resulted in prosperity.

Referring to Prime Minister Imran Khan’s administration, he said it is a government that is the ‘worst in the history, incompetent, and one that neither knows governance nor is concerned about the problems the public faces’. “In two years, the [rising] inflation has brought people to the brink of disaster. First, sugar was exported and the gains from depreciation in the rupee were availed. Farmers were punished and the exporters made billions. The price of sugar has gone above Rs100 [a kilo]. Now, sugar is being imported!” he said.

“For the first time in history, there was a shortage of wheat even before the harvest season ended. A member of the government asked on the floor of the House where the wheat had gone,” he said. “Oil prices were jacked up in one shocking move. Electricity prices skyrocketed but the circular debt is still out of control,” he added.

“The [government’s] worst incompetence and incompetence has led to load-shedding of electricity as well. Projects using oil should have been shut down but there was a conflict of interest,” he stated. “For the second time in the country’s history, GDP growth was negative,” he mentioned, saying the first one was in 1952. There is nothing but misery and hardship under the Tabdeeli Sarkaar,” he lamented.

The PML-N president said ‘unparalleled propaganda’ was spread against his party. “There was historic development work in Pakistan under Nawaz Sharif,” he noted. “In Pakistan’s 72-year history, there is no parallel to these projects. Those traveling on the Sukkur-Islamabad motorway said it was a better journey than on an airplane,” he went on to say. “During the Nawaz Sharif era, four LNG projects worth 5,000 megawatts (MW) were implemented and per-unit cost does not exceed Rs12-13. In Nawaz Sharif’s third term, no corruption took place in any of the projects. To date, not a single penny’s worth of corruption has been proven,” he said, adding that PM Imran and his followers have ‘turned upside down but no corruption was ever found’.

The PML-N leader said his party was not against impartial accountability. The entire country, he added, watched the spectacle of pinning the opposition against the wall. “Despite being cornered, we extended our hand for cooperation but they rejected it,” he explained. “Those in the Cabinet are not saints either and no one questioned them,” he said. “People are longing for the old Pakistan today because this tabdeeli [change] has their lives,” he added. “Was that Pakistan better or is this Pakistan better?” he asked.

In his remarks, senior PML-N leader Khawaja Asif sought to highlight the government’s alleged failures in the foreign policy domain. He said the annexation of occupied Kashmir by India and the genocide of Muslims being carried out in India was Pakistan’s ‘biggest foreign policy failure’ in the last two years. “They (government) have done treason with the blood of the martyrs. Kashmiris are praying for Pakistan’s help. This is an abject failure,” he alleged.

Former prime minister Shahid Khaqan Abbasi spoke of how the incumbent government was ‘ignorant and forced to lie’ to the nation. “The electricity bills for domestic consumers have been increased 30%,” Abbasi said, adding that ministers had explained earlier that power tariffs had been bumped up to control the circular debt. “In our tenure, the circular debt rose by Rs462 billion and by the time we left the government, it was Rs1,026 billion,” he noted. “Today, it is Rs2,200 billion, meaning that it shot up by Rs1,200 billion in two years!”