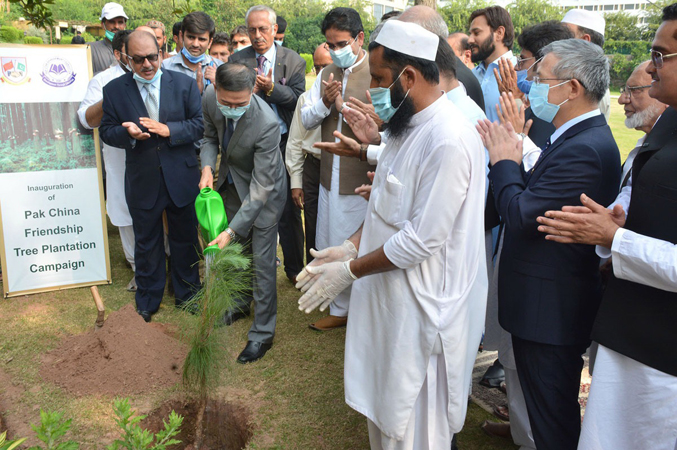 Ambassador of People’s Republic of China Yao Jing has said Pakistan has miraculously overcome Covid-19, adding that the government led by Prime Minister Imran Khan needs full credit for this.

The Chinese ambassador made these remarks while speaking as chief guest at a tree plantation ceremony organized by Pakistan-China Friendship Association, at the KP House.

The Ambassador said COVID 19 pandemic has affected all and sundry all over the world adding China tried its best to help Pakistan effectively deal with the issue.

Ambassador Yao Jing noted with satisfaction that virus cases in Pakistan had dropped significantly and that was the reason he was able to make his first ever public appearance ever since break out of COVID 19.

The ambassador also talked about CPEC and termed it a project of peace and prosperity adding KPK holds utmost importance in terms of CPEC.

He noted that Prime Minister Imran Khan has taken categorical position developing CPEC, as a foundation of prosperity and development not only for Pakistan but the entire region.

China, he added, attached high importance to promoting leading role of Pakistan for regional’s connectivity and socio-economic progress. China will remain a strong partner of Pakistan on its way to socio-economic uplift in all sphere of life, he added.

The ambassador said he would extend maximum possible support to the KPK government in its tree plantation drive. He also shared his experience of planting a tree in his embassy.

The ambassador later talking informally to media people said the United States was trying to create problems in Hong Kong and Xinjiang province. He said China shall resist all such moves with full force.

The ambassador lauded services of the Pakistani-China Friendship Association for promoting bilateral relations. He especially mentioned role of Secretary General Syed Ali Nawaz Gillani in this regard.

Kamran Khan Bangash thanked the ambassador for his country’s consistent support for the progress and well-being of the people across the board. China-Pakistan friendship is deep-rooted in the hearts of the people and stood the test of the time. About the CPEC, he said this game-change mega project was contributing a lot for the country’s bright future

In the end, the ambassador gave away souvenirs to MPs and media people also.