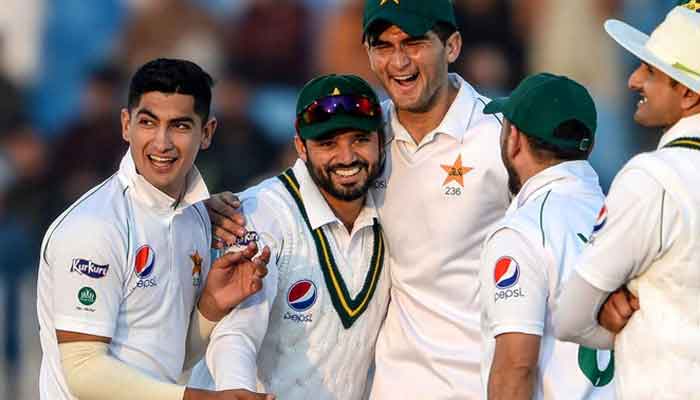 SOUTHAMPTON: Pakistan are grateful to rain which has stopped play after the openers – Shan Masood and Abid Ali – played just 18 overs to score 41 runs without being separated in the second innings after being enforced a follow-on by England in the third and final Test here at the Ageas Bowl on Monday.

Abid Ali was 22 not out and Shan Masood was on 13 as Pakistan remained 269 runs shy of making England bat again.

Both opened their second innings in the morning of the fourth day after the tourists were all out for 273 at stumps on the third day.

Rain forced an early lunch break, although the forecast for Southampton is more encouraging for the rest of the day as England aim to wrap up a 2-0 series victory.

A scrappy morning in the field for England was summed up when James Anderson, who is two wickets short of becoming the first fast bowler to take 600 Test wickets, saw wicket keeper Jos Buttler fail to pouch a routine catch in his third over when Masood edged the ball outside off stump.

It is the fourth time in the match that Anderson has been deprived of a wicket due to a dropped catch.

England also gifted Pakistan four overthrows early on, while Ollie Pope left the field after appearing to hurt his shoulder making a scrambling stop near the boundary rope.

Pakistan’s openers are hoping to give their side a chance of avoiding an innings defeat, having been bowled out for 273 on Sunday in reply to England’s 583-8 declared, in which Zak Crawley made 267.