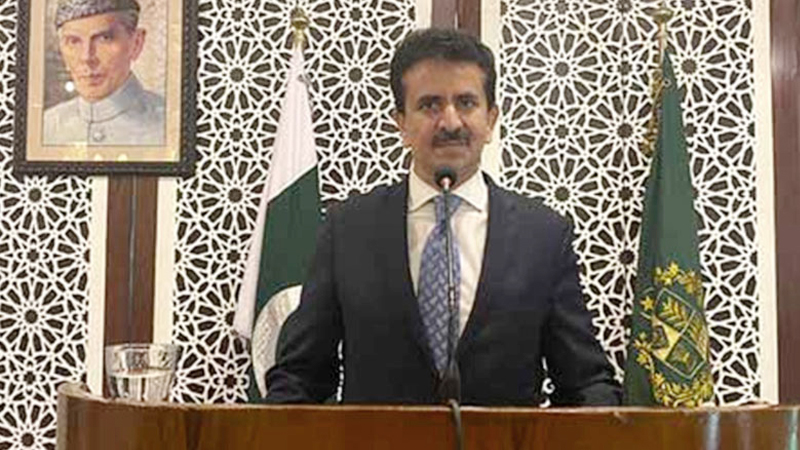 Pakistan on Sunday strongly rejected the unwarranted and irresponsible comments made by spokesperson of the Indian Ministry of External Affairs (MEA) on the joint press release of the Second Round of China-Pakistan Foreign Ministers’ Strategic Dialogue.

“The MEA’s contentions about Jammu and Kashmir being the so-called ‘integral and inalienable part’ of India and an ‘internal affair’ are a laughable fiction, totally contrary to historical and legal facts and in violation of the relevant United Nations Security Council (UNSC) Resolutions. India’s self-serving claims regarding Jammu and Kashmir, including the parts which are under illegal Indian occupation, have no basis whatsoever,” Zahid Chaudhri, the spokesperson of the Ministry of Foreign Affairs, said in a press release.

According to the press release, Pakistan also categorically rejected India’s malicious propaganda against the China Pakistan Economic Corridor (CPEC), which was another manifestation of desperate Indian attempts to mislead the world community.

On Saturday, India had “rejected” the joint statement issued after the strategic dialogue in which the Chinese side stated that the Kashmir issue should be resolved according to the relevant UNSC resolutions and opposed “unilateral actions” in the region. India had also reiterated its opposition to the China-Pakistan Economic Corridor (CPEC).

“India has no locus standi on the issue – historical, legal or moral. The regurgitation of false claims by India can neither change facts nor divert attention from India’s state-terrorism in the Indian Illegally Occupied Jammu and Kashmir (IIOJK) and its egregious violations of human rights of the Kashmiri people,” it further added. Rather than resorting to false and misleading assertions, India should faithfully implement its international obligations.

“India must immediately vacate its illegal and forcible occupation of IIOJK and let the Kashmiris exercise their inalienable right to self-determination through a free and impartial plebiscite under the auspices of the United Nations as enshrined in the relevant UNSC Resolutions,” it further said.

“These lists contain the names of individuals and entities designated under the two sanction regimes established pursuant to the UNSC resolutions.”

The statement added that consolidated SROs were issued periodically and that similar orders had been issued by the ministry in the past as per the requirement to meet international obligations. “The last such SROs were issued in 2019.

“Reports in certain sections of the media about Pakistan imposing new sanctions, through these SROs, are not factual.

“Similarly, assertions made by some sections of the Indian media, as to Pakistan admitting to the presence of certain listed individuals on its territory, based on the information contained in the SRO, are baseless and misleading.”

It is once again reiterated that the information contained in the SRO is reproduced as per the details in the list entry of the individuals/entities designated under the two sanctions regime, which is publicly available, and contains the names of individuals who despite their confirmed deceased status still continue to be on the sanctions list, the statement added.