NAB determined to eradicate corruption in all its forms, manifestations: chairman 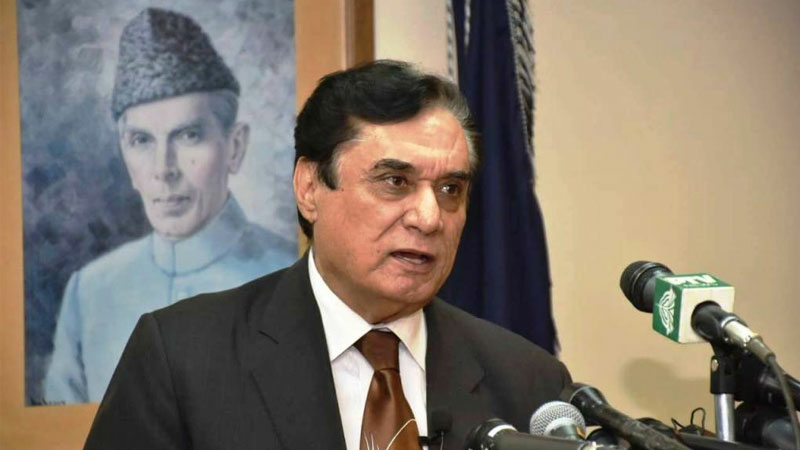 Justice Javed Iqbal, Chairman NAB, has said that Transparency International (TI) Pakistan and World Economic Forum have appreciated NAB’s overall performance in eradication of corruption and corrupt practices especially the recent report of transparency international Pakistan dated July 30, 2020 in which Mr. Sohail Muzaffar Chairman TI Pakistan has stated that NAB under the leadership of Honorable Mr. Justice Javed Iqbal, Chairman NAB, anti-corruption drive in the last 34 months has resulted in an excellent impact much needed since its inception, and NAB has so far made recovery of Rs 466 Billion which is a remarkable achievement.

TI Pakistan further stated said that NAB has played a very positive role in curbing corruption. Transparency International (TI) Corruption Perception Index (CPI) of Pakistan is regularly improved. In 1999 Pakistan CPI Score was 22/100, the rank 87 out of 99 countries, and in 2019 Pakistan has achieved the CPI Score of 32/100, and the rank 120 out of 180 countries. He said Transparency International has also evaluated NAB performance and compared to 27 South Asian ACA, NAB performance indicators are at par or better to other regional agencies. And in Pakistan, compared to anti-corruption organizations like the Federal Investigation Agency and Provincial Anti-Corruption Departments, NAB is perceived to be more effective.

The Transparency International, Pakistan had further stated that under the dynamic leadership of Honorable Mr. Justice Javed Iqbal, Chairman NAB has over 51 years judicial experience. Honorable Mr. Justice Javed Iqbal, Chairman NAB is the only Chairman NAB who has held the office of acting Chief Justice of the Supreme Court of Pakistan. His initiative to have interaction with businessmen so that businessmen feel free to do business in Pakistan as they are the backbone of National economy, and play a vital role in the development of the country. Transparency International Pakistan has been working with NAB since 2000, on awareness and preventive efforts to eradicate corruption, and has held many workshops, trainings, and seminars, specially on NAB’s interaction with business community and bureaucrats, assisting in NACS, UNCAC etc,

Honorable Justice Javed Iqbal, Chairman NAB said that NAB is determined to eradicate corruption in all its forms and manifestations as corruption is the mother of all evils. In order to further improve the quality of inquiries and investigations on the basis of solid and documentary evidence, NAB has started combine investigation Team (CIT) system in order to conduct inquiries and investigations comprising of one senior investigation officer, one junior Investigation officer, Additional Director investigation as case officer, legal counsel, financial expert, land revenue expert and forensic expert under the supervision of Director and DG concerned to benefit from collective wisdom. NAB has established its own Pakistan Training and Research Academy in which specialized training has started to impart investigation officers as well as Prosecutors officers on modern lines in order to conduct investigations of cases of money laundering and white collar crime cases besides establishment of state of the art Forensic Science Laboratory in NAB Rawalpindi for scrutinizing documents and fingerprints, analysis of digital data etc. The Forensic LAB of NAB not only saves time but also ensures secrecy and quality which is lending quality in conduct of Investigations. NAB has also established Anti Money Laundering Cell in NAB headquarters as well as witness handling cells in all the regions to improve the standard and quality of investigations as per law.

NAB is regularly reviewing the performance of NAB through computer based specially devised state of art monitoring and evaluation systems but also physically inspecting through Chairman NAB’s Inspection and Monitoring Team (CIMT) to further review overall performance of NAB. On the instructions of Chairman NAB, Special complaint cells have been established in NAB Headquarters and all bureaus to listen to the complaints of the business community as NAB has great regard for the business community which play a vital role in the development of the country. Moreover, Honorable Hussain Asghar, Deputy Chairman NAB has life long experience in investigation of white collar crime cases. Similarly, Zahir Shah, DG Operations NAB and all DGs of Regional Bureaus of NAB are working very hard to examine the work of Investigation Officers in an analytical way in order to overcome the shortcoming if any well in time. NAB intends to incorporate experienced legal counsel, prosecutors, deputy prosecutors and additional prosecutor general in its legal team in order to have vigorous prosecution of the Honorable Courts. NAB. Most importantly, Investigation Division and Prosecution Divisions of NAB under the supervision of Honorable Hussain Asghar, Deputy Chairman NAB and Syed Asghar Haider, Learned Prosecution General Accountability (PGA), NAB under the dynamic leadership of Honorable Mr. Justice Javed Iqbal, Chairman NAB are absolutely committed to root out corruption so that corrupt should be brought to justice and looted money should be recovered and deposit in national exchequer as per law.