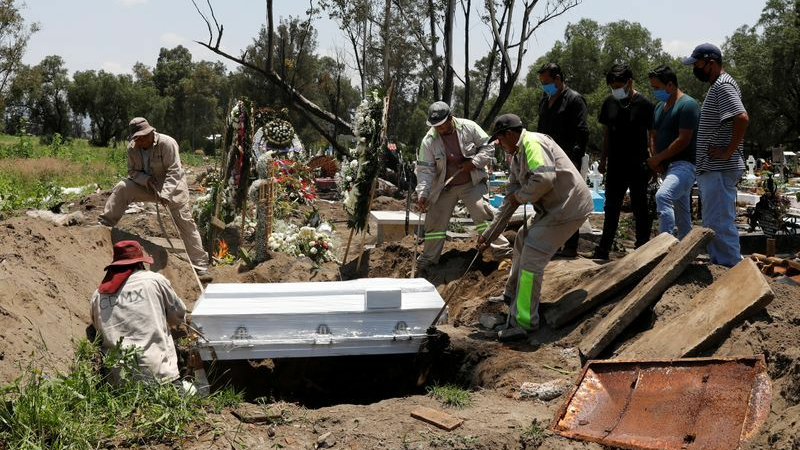 Standing in a graveyard on the outskirts of Mexico City decked out in a cowboy hat to cover his rugged features from the sun, guitar player Eberardo Vargas this week had fewer funerals to play at than he has for most of the coronavirus pandemic.

Even as Mexico passes a grim new milestone in its battle with the pandemic – 60,000 fatalities – signs of relief are beginning to emerge in the country that has registered more dead than any other bar the United States and Brazil.

Vargas, 49, said May, June and July were the busiest months he could recall as a musician as mourners in the municipality of Ecatepec northeast of Mexico City paid him and his band to hear favorite songs of lost loved-ones during their last goodbyes.

But that demand has eased lately as public life gradually returns to normal in the sprawling Mexican capital, prompting the government to declare this week that the coronavirus scourge is in “sustained decline” in Mexico.

“We sometimes had 10 or 15 performances a day at the peak of the pandemic, but it’s come down,” said Vargas, who had little to do at the Ecatepec graveyard for much of Friday. “Now, it’s more like three, or sometimes five.” Deaths due to coronavirus are on track to hit their lowest weekly total for two months, and new cases have eased since reaching a record daily number at the start of August. “Our whole band used to wait here, there was always work,” said Vargas. “Now, we take turns because it’s become so quiet.” Still, the health ministry on Saturday reported 644 additional fatalities, taking the total to 60,254.

Earlier in the pandemic, Mexico’s coronavirus czar and Deputy Health Minister Hugo Lopez-Gatell had cast a figure of 60,000 dead as a “catastrophic” outcome.