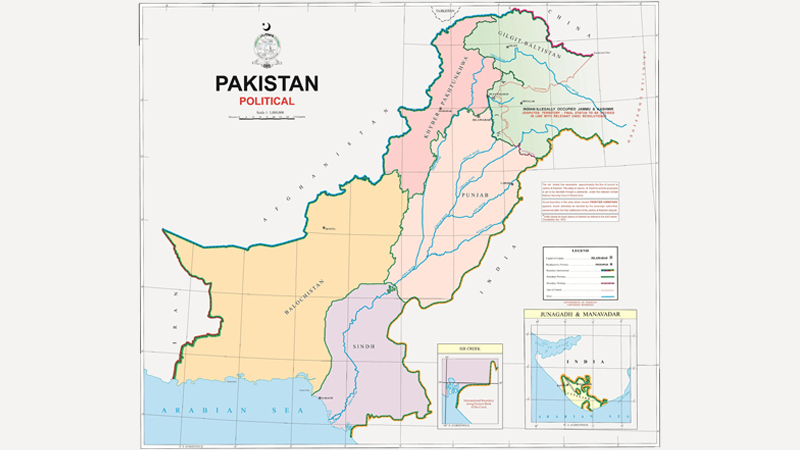 Just 10 days prior to its turning 73, Pakistan had taken a very bold , courageous and unprecedented step forward when it published its new official map on August 4, 2020 in a befitting response to counter India’s false claim on Gilgit-Baltistan as part of its occupied Kashmir which was virtually annexed by Narendra Modi government on August 5, 2019 by scrapping its special status and making it an integral part of the Indian Union.

The new official map of Pakistan showing disputed territory of Kashmir and Sir Creek was made public by taking all on the board with the consent of all political parties including the opposition parties.

This was a very imaginative step onwards to say the least and the due credit ought to be given to Prime Minister Imran Khan and his cabinet members and had thus shown the world at large the darkened and most horrible face of Indian Prime Minister Narendra Modi who had dared to lay false claim on the parts which enjoy genuine autonomy and have their own administration in the mountainous north of Pakistan.

According to the Partition Plan of June 3, 1947, the British Indian Colony was to be divided into two sovereign states. The Hindu-majority areas were to constitute India while the Muslim-majority areas of Western provinces and East Bengal were to be included in new state of Pakistan.

Last Viceroy of India Lord Mountbatten had set up a Boundary Commission headed by Barrister Cyril Redcliff including two representatives each of Muslim League and Congress. Justice Deen Mohammad and Justice Munir were representing Pakistan and Justice Mahajan and Justice Teja Singh of India. All the judges were High Courts judges. According to some reports, members of the Commission could not agree among themselves and Barrister Redcliff himself had written the recommendations of the Commission on the basis of minutes of meetings held.

While the sub-continent partition took place on August 14, 1947 with Pakistan coming into existence on the world map out of nowhere and India had become independent the next day on August 15, the Boundary Commission report was given on August 16,1947.

Contrary to earlier indications, Muslims majority areas of Ferozepur and Gurdaspur were to form part of Pakistan as per Redcliff Commission report. But the report was tempered by none else but Lord Mounbatten himself who was bribed by Pandit Jawahir Lal Nehru to be made the first Governor General of freed India. Thus land road access to Kashmir was given to India and Kashmir issue was created.

It is well-known fact that both Lord Mountbatten and Lady Mountbatten were quite friendly with Pandit Nehru whose main theme was to preach hatred against Pakistan, he was the new State’s bitterest opponent and he had made it his life’s mission to isolate Pakistan and also had propounded the thesis that a Kashmir settlement would lead to the annihilation of the 50 million Muslims of India.

Out of its hegemony policy, India had forcibly not only captured Jammu and Kashmir territory but also Junagadh among other territories.

In the wake of revival of lingering unresolved Kashmir dispute through Prime Minister Imran Khan ‘s maiden speech at the UN General Assembly last year following which the otherwise dormant Kashmir issue has since been discussed by the UN Security Council thrice in less than a year, launching of the new official map was a big step to tell the sleeping international community to wake up from deep slumber and exert their pressure on India to implement UN Security Council’s resolutions .

The UN Security Council resolutions give the struggling and suffering Kashmiris of occupied Kashmir the right to self-determination through a free and independent plebiscite under UN auspices in order to decide their future themselves. The resolution so passed at India’s own initiative were initially agreed to be implemented by afterwards from first Prime Minister Nehru and 14th PM Narendra Modi all have been quite shamefully and brutally declining these resolutions. Narenda Modi had crossed all limits when he on August 5 last year annexed disputed territory of Jammu and Kashmir by scrapping its special status and putting the entire population of the valley under curfew/lockdown which is still continuing even after more than a year.

The international community barring couple of countries including China and Turkey though keep on voicing their concern on human rights violations and ongoing Indian security forces atrocities and brutalities on unarmed Kashmiris but they do not go a step forward and exert any pressure whatsoever because of their own trade, financial and economic interests with big country India.

Publication of new official map of Pakistan at a crucial juncture of history when India is trying to annex more and more territories which presently form part of its neighbouring countries will apprise the world at large as to what was the real and certified map of Pakistan in the light of original and un-tempered Redcliff Commission Award.

This is not all. The new official map also strengthens Pakistan’s case over India’s annexed Junagadh, Gurdaspur and Ferozepur.

The new official map is to be submitted before the United Nations and after it is okayed by the world body, hopefully it will set many wrongs and misgivings right and the world will be knowing the facts and dealing with Pakistan according to its new official map from now onwards..

Undoubtedly, Prime Minister Imran Khan has given a new narrative to the lingering Kashmir issue, as a flashpoint between two neighbouring nuclear powers and a looming threat on the regional as well as international peace. The tempo which the PM had so far built and has come to be known as the Ambassador of Kashmiris the world over must be maintained and carried forward forcefully and emphatically by the official quarters concerned in Islamabad and also Pakistan’s missions in foreign countries around the world. Lot still remains to be done. There is no time to relax and rest. The moral, political and diplomatic support to Kashmiris of occupied territory most be carried on more vociferously than before by plugging the loopholes here and there in our ranks and files, please.

The writer is Lahore-based Freelance Lance Journalist, Columnist and retired Deputy Controller (News), Radio Pakistan, Islamabad, and can be reached at zahidriffat@gmail.com