Boycotting Chinese products is not an easy task for India!

Notwithstanding high-level marathon meetings between India and China to diffuse tension at Line of Actual Control (LAC), no headway is visible, as China has categorically declined to retreat to its “May” position in eastern Ladakh. More than ten rounds of high-level talks have been held, including five between the Corps Commanders, in addition to clandestine talks between the special representatives and the foreign ministers for disengagement and return of the PLA. No tangible and cogent outcome is evident.

Seeing no disengagement, both sides have deployed additional force at vintage point; away from LAC. Peoples Liberation Army (PLA) has deployed its forces along the Sino-India border up to Arunachal Pradesh; covering over 3,488 kilometres of the border.

Meanwhile, since the death of 20 soldiers, there are rising anti-China sentiments among the Indian population. The demand for the boycott of Chinese products has been gaining momentum. India is highly dependent on cheap Chinese goods and products and is also not in a position at this juncture to stop the imports from China or at least boycott the China-made products. India has a trade deficit of 40 billion US Dollars with China’s total trade of 80 billion.

Boycotting Chinese products is not an easy task for India. China’s deep penetration into Indian markets is difficult to control

Though acting tough, the Indian government took certain measure to dissuade more Chinese investment, but the Chinese products have already penetrated deep into the Indian market, especially making a huge investment in the mobile manufacturing industry, electronics, power sector and infrastructure, including highways IT sector and some other fields. In addition to this, Chinese companies also have joint ventures in fresh food and snacks supply chains. Chinese firms are being hit by new import hurdles initiated by India. It is facing delays in seeking approvals from the Bureau of Indian Standards (BIS). Questions are being raised about the quality of Chinese products. 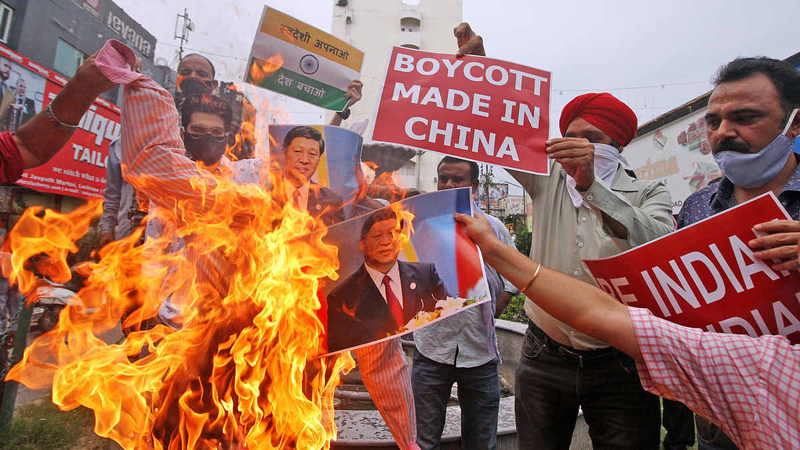 China has an investment of over six billion US dollar in India and was planning more investment, but the LAC face-off has caused affected blockade to future investment. Every effort is being made to clip Chinese investment. India is unlikely to approve several pending proposals for investment by China. Two top national mobile phone companies, Airtel and Vodafone-Idea, which has been using Chinese technology to run their mobile system platforms are feeling pillaged by these bans. It is also difficult for them to suddenly shift to Korean Technology as its alternative.

Chinese every move to stay in India as a big investor carries doubt of security concerns. Therefore, any move by the Chinese or its companies is under the scanner. In case of some already Chinese run companies are under investigation for suspected hawala tractions and other violations of rules and regulations.

Reacting sharply to the killing of its troops, India banned the use of 59 Chinese apps showing its security concerns and scores of many more Chinese’s Apps, popular with Indians were also recently curtailed. The BSNL, India’s top public sector mobile service provider which was about to settle the deal for the launching of the 5G high-speed internet facility with Chinese major Huawei Technologies Ltd., has cancelled the tenders to bar this Chinese major to compete for the 350 million subscriber market. Xiaomi Mobile file for import of spare parts from China has been kept pending thus affecting its manufacturing and sale of mobiles.

The role of the United States of America, in framing decision of India vis-a-vis China, cannot be condoned. India has skewed too much towards the US after the border intrusion. Even the US presidential nominee from Democratic Party, Joe Biden has offered to stand with India in case of further expanding tension between India and China. China is also facing challenges from many European countries and the USA. Huawei heads a growing list of Chinese tech names; the Trump administration is targeting as security risks in an initiative dubbed “Clean Networks.” It wants countries to remove them as suppliers to telecom systems, undersea cables, and Smartphone app stores.

The Trump administration is ramping up pressure on European countries and other allies like Australia, by threatening to withhold intelligence sharing if they allow Huawei to build their platform for the next-generation, or 5G, networks. The UK Prime Minister has already announced to free Huawei Company and its 5G internet service by 2022. The UK has been a Lapdog of the US and always follows his instruction as it has done in the case of G5 technology/services from China’s company.

Coming back to India’s future trade relations with China, it is pertinent to discuss that to further bar Chinese investment in India; exclusive rules have been introduced for the neighbouring countries. Now every paper for future investment or to add investment to already running companies would have to be routed through the new department to have clearance by Neighbour Investment Department.

Eight out of ten mobiles in India are Chinese made, either at its plants in India or imported from China. In the construction and building sectors, the skilled workers use Chinese made tools. These tools are not only cheap to buy but are easily repairable. In these sectors, China dominates with bit population of 1300 million. This market is much bigger than the total European market.

Boycotting Chinese products is not an easy task for a country like India. The data makes it clear that India stands to lose more than gain from China’s economic boycott. India doesn’t buy goods from China because of a robust friendship; it is a purely market-motivated decision owing to China’s ability to supply commodities at a better/low price. Since India does not have the means to sufficiently replace such a large volume of products at short notice it will look for other options. This means India would have to compromise on quality or price or both, effectively leading to inflation.

Despite strong sentiments against China, its Central Bank has made a small investment last week in ICICI bank and still trying to make inroads into the Indian financial system. The Central Bank had also invested in HDFC Ltd, another India’s top financial institution. These investments have been made despite opposition by resenting Confederation of All India Traders (CAIT). The CAIT has also written to the Reserve Bank of India (RBI) to withhold permission to these investments in top banking institutions

The Communist Party of India (Marxist) Party has taken a different stand on China intrusion. The CPI (M) in its mouthpiece “People’s Democracy” weekly, has listed out a few of Jammu and Kashmir acts on the part of India that the CPI (M) feared might have contributed to such a situation developing in eastern Ladakh. The Editorial terms China action as “egregious” while listing out suspected provocative steps by the Indian side.

The editorial also quoted Union Home Minister’s statement in parliament on 6th August 2019, “I want to put on record that whenever I say State of Jammu and Kashmir in the House, then both Pak occupied Kashmir (PoK) and Aksai Chin are part of it”.

Whatever may be the developments on Sino-India eastern Ladakh affairs India wouldn’t trust China any more. Modi and China’s President’s Xi Jing Pin’s romance had a much shorter life than Jhawar Lal Nehru’s Hindi-Chinni-Bhai-Bhai romance of 1962.

The writer is a senior journalist and Indo-Pak peace activist.